US city installs truck side guards to aid pedestrian safety 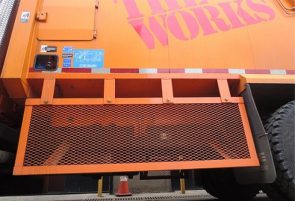 The City of Cambridge, Massachusetts is partnering with Volpe, the National Transportation Systems Center, to install truck side guards on city-owned trucks in order to enhance safety for pedestrians and bicyclists travelling in Cambridge. The city intends to install these side guards on heavy-duty vehicles in an effort to lead by example in Massachusetts and to encourage private entities to do the same.

Side guards, devices intended to sweep aside a pedestrian or cyclist in a side-impact crash, rather than being swept underneath the vehicle, are installed on large trucks.

These are said to protect cyclists and pedestrians from falling underneath the vehicle, and helped reduce cyclist fatalities by 61 per cent and pedestrian fatalities by 20 per cent in side-impact crashes with trucks in the United Kingdom after the guards were introduced in 1986. Volpe and the city are jointly working on a vehicle redesign strategy that will establish recommendations for implementing truck side guards, blind spot mirrors, and other vehicle-based technologies on the city-owned truck fleet.