Sernis lights the way with road studs for harsh conditions 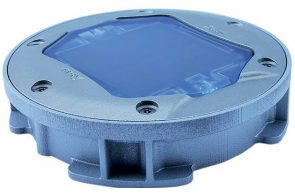 Portuguese manufacturer Sernis has introduced the SR-40, a reflective road stud that works in harsh conditions and is snowplough-resistant. Its design includes a solar panel of less than 1W in power, making it suitable for countries with low sun exposure.

To complement the SR-40, Sernis has produced the inductive power SR-45 IPW, which the company says it is suitable for use in roads, tunnels, parks and airports. Installation is made easier via the plug-and-light concept, while a non-wired connection reduces the need for drilling and deterioration of the road in future roadworks. All road studs are connected to the Central Control Unit. The 3kg SR-45 IPW uses 230 volts AC and its 8 LEDs consume 5 Watts of power.