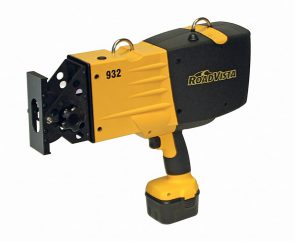 Retroreflectivity is only going to become more important for highways authorities: Jon Masters reviews some of this year’s major developments

Measurement of the retroreflectivity of traffic signs and road markings – the amount of light that is reflected directly back from its source at any angle – is only likely to become more important for highways authorities. There is the pressing need to maintain levels of safety at night, particularly so where streetlighting is being reduced to save on energy consumption. Plus, retroreflection may well become critical for guidance systems of autonomous vehicles.

Suppliers of retroreflectometers, the complex instruments that measure retroreflection, report significant developments aimed at answering demand for more data on traffic sign and line marking performance. According to RoadVista, for example, the company’s RoadVista 932 retroreflectometer will measure the nigh-time retroreflected colour of road signs – particularly useful and gaining in popularity as road agencies move to digital printing of road signs. Where comprehensive measurement over long distances is needed, mobile, vehicle-mounted devices are in demand.

Technology is now available for regular monitoring of the retroreflectivity of road markings, safely and economically at traffic speed and with no interference to traffic flows, according to manufacturer RMS (Reflective Measurement Systems) 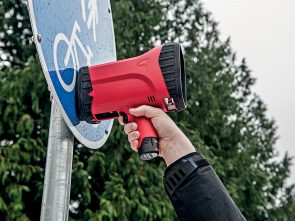 Attached to the front of a testing vehicle, its new product RetroTek-M can simultaneously survey six streams of data in a single pass. In other words it can measure the retroreflectivity of multiple longitudinal and transverse lines and objects.

It uses sophisticated machine vision cameras and software to locate markings and objects for surveying. RMS says cameras capture images of full lane width, illuminated by a projected light source in a geometry conforming to the relevant standards EN1463 and ASTM E1710. Precision driving in close proximity to road markings or markers is not needed, the company adds.

RMS launched the RetroTek-M traffic speed retroreflectometer in late 2015. The company has also developed the RetroTekView suite of reporting software for single and multiple surveys, plus an online interactive survey management tool.

RoadVista reports that it has tapped into decades of mobile retroreflectivity experience to develop the LaserLux G7 (LLG7). The LLG7 represents the seventh generation of RoadVista’s mobile reflectometer, scanning lines at an impressive rate of 400 scans per second, and thus providing an accurate retroreflective measurement every 60mm while travelling at a speed of 104km/h, the company says.

The LLG7 has an automatic positioning system which monitors and manages the device’s pitch and height, ensuring measurements remain at the proper geometry as vehicle and roadway conditions change. 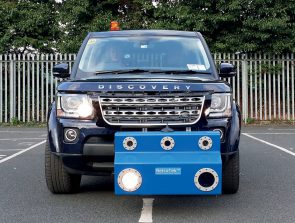 “Ease and simplicity of data storage is a key component – simply stored on a USB flash drive. At the end of any given day hundreds of miles of recorded data can be easily taken away on a flash drive and plugged-in at a later time,” Nelson says. The LLG7 advancements do not stop there, he continues. An exclusive Squid Mount vacuum cup mounting system allows the device to be attached to virtually any vehicle. This dramatically reduces operational costs. “The LLG7 records hours of data, sets up in minutes, and calibrates in seconds,” RoadVista says.

RoadVista is also working with various organisations in studying retroreflectivity and visibility of pavement markings for machine vision control of autonomous vehicles. The LLG7 has the capability to measure infrared retroreflection, which may become the norm for defining the adequacy of pavement marking infrastructure for autonomous vehicles’ machine vision technology. 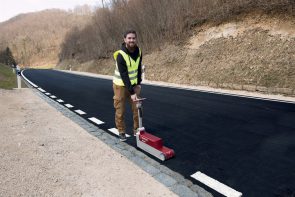 Zehntner, the Swiss manufacturer of precision testing equipment, has added three new features to its retroreflectometers

Zehntner, the Swiss manufacturer of precision testing equipment, has added three new features to its retroreflectometers. The company’s instruments for measuring the retroreflectivity of road markings range from the basic ZRM 6006, up to its professional grade ZRM 6014 and the vehicle mounted dynamic measuring system, the ZDR 6020.

The retroreflectivity of traffic signs can be measured against all international standards using the ZRS 6060, Zehntner insists.

New features recently added include an enhanced touchscreen to improve the manual handling of the ZRM 6014 – in addition, this model and the ZRS 6060 come with an optional integrated 5MP camera.

Furthermore, the ZDR 6020 is now equipped with a tablet computer for better, easier operation. The rugged design tablet replaces the laptop and touch display of previous versions, so making a one-man operation all the more easy. Free Zehntner Mapping Tools software allows retroreflection data to be analysed, with results displayed in chart, tables or map formats.

During the third quarter of 2016, Delta expects to be launching a new instrument for the measurement of traffic sign performance – the RetroSign GRX – the company says. The new model will be the most advanced retroreflectomer available on the market for measuring traffic signs, Delta claims.

New features incorporated in the GRX will include a camera for capturing images of signs, scanning QR codes and barcodes for asset management purposes and for supporting a rapid process of calibration. There is the promise of up to seven observation angles captured in a single measurement, with other features such as sign contrast assessment and a pass/fail function based on sign databases.

The GRX will be supported by an app, initially for iPad, according to Delta. Data will be transferred wirelessly for back-up, storage, processing and presentation in existing software. GRX and its associated app, the company says, will present a fast and easy means of capturing, processing and presenting traffic sign data.

Special coating is one in the eye for graffiti

LipaProtect AG15 is a new dual component polyurethane water-based coating, which the UK’s WJ Group is marketing for protection of traffic signs and other safety signs. The AG15 protective coating is certified to not detract from signs’ existing retroreflectivity values. “AG15 is best applied in a thin even film with an airless sprayer, exhibits non-stick properties and can be easily cleaned with our proprietary cleaner,” a WJ spokesman says.

Numerous fast-working sign printing machines stood out clearly among the displays and exhibits at the Intertraffic show in Amsterdam this year. Busily working away, printing traffic signs on retroreflective sheeting, these digital inkjet machines appear to have brought a step change in efficiency for sign manufacturers.

For the leading materials suppliers, which have rapidly manoeuvred themselves a market position offering digital sign printing, the key question is: what gives them the edge over the competition? 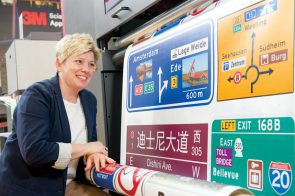 3M’s Christie Vitale: “The shift to digital printing has attracted a lot of interest”

“Digital printing has changed the ball game,” says Avery Dennison marketing manager Marco van der Linden. “Customers are looking for more cost effective ways of doing things and this is it. With this equipment road signs can be produced quicker and cheaper, with a warranty of up to 12 years.”

Emblazoned on Avery Dennison’s Intertraffic display was the slogan, ‘Join the TrafficJet revolution’. The changes brought by the advent of digital sign printing are this significant, van der Linden says. The company’s TrafficJet printer, using Avery Dennison sheeting, inks and reflective overlay, is CE certified and “provides the perfect solution, light in weight and about a fifth of the cost of other printers”, says van der Linden. “Whereas some digital sign printers start at about $150,000, we can supply a lightweight version of the TrafficJet for customers for about $30,000. Add to that the cost of a laminator and plotter for cutting out the sign print – a complete sign shop operation can be set up for less than $150,000.”

For 3M, a key difference of its digital sign printing offer is speed and assurance of quality that comes from using the company’s retroreflective sheeting and inks. The emergent shift to digital printing may seem to be a natural development – but it has still demanded close attention to suitable material technology, says 3M’s global business development manager Christie Vitale.

“The shift to digital printing over the past two years has attracted a lot of interest. Unlike conventional four-colour printing, digital techniques allow regulated colours to be achieved in all light conditions with the right retroreflective sheeting and inks,” Vitale says.

“We can create a great variety of signs and colours, with machines capable of speeds 95-500 square feet of printing per hour. But we’ve had to design special inks and carry out a lot of testing with third party certification, including simulated weathering tests.”

The manufacturer offers retroreflectivity up to Class 11 across an extensive portfolio of sheeting products. “Speed of printing is important,” Vitale goes on. “In our case we have partnered with three leading printer manufacturers: HP, EFI and Durst.

Customers deal directly with the printer supplier, to get ink and sheeting from 3M.”

The upshot is 3M’s MCS (match component system) kitemark. “Effectively this says if a printer is used with certain sheets and inks, it comes with a warranty of up to 12 years, Vitale concludes. “We’re expecting a very large growth in the market for digital printing over the next five years.”