First published in The Global Road Safety Review 2015 as On the right path? 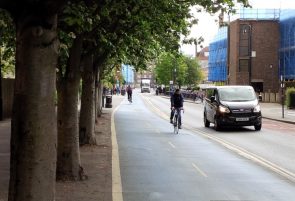 More and more European cities are designing into their traffic systems cycle lanes and paths. It’s part of a welcome strategy to boost their environmental credentials and improve the safety of cyclists. But a recent study questions how effective cycle lanes really are – at least as they have been designed. David Arminas, who has many years of cycling in London, reports

Perceived wisdom is that cycling is good for your health. There is also an assumption across Europe that cycle lanes, too, are good for your health – they keep cyclists a safer distance from cars. Also, environmental arguments for getting more people onto bicycles are well known. The theory is the more people cycling, the less traffic congestion and less air pollution from cars. Governments at all levels in the UK and Scotland are keen on initiatives that help meet the ambitious target of cutting net emissions by 80% by 2050, compared to 1990 levels. The Scottish Parliament has also set an interim target to reduce emissions by at least 42% by 2020. UK cycle lanes are of either the advisory broken-line type or mandatory solid-line type that may or may not be coloured. Well-defined cycle lanes can encourage people who might otherwise be too nervous to take to a bicycle. But just how effective are cycle lanes for increasing the safety of cyclists?

The Race for Space

Not as much as you might think, according to recent research by Kathryn Stewart, a lecturer in the Transport Institute at Edinburgh Napier University in Scotland, and Adrian McHale, senior transport engineer at built environment consultancy RPS Group, in Newark-on-Trent, England. In fact, other factors are more important than the presence of cycle lanes that allow safe overtaking distances. Nonetheless, environmentalists, lifestyle gurus and cyclists themselves are fighting for more cycle lanes.

Meanwhile, motorist groups, and in London some major business groups, have started to push back. The UK’s Guardian newspaper reported last October that plans for two cycling superhighways through London’s centre – a 5km north-south route and a more ambitious 30km stretch running west to east – are being heavily criticised. The Canary Wharf group, which manages London’s high-rise business estate to the east of the city centre, was found distributing an anonymous briefing paper that called the plans “extremely damaging to London” because they would cut traffic lanes from four to two.

Amid the controversy, road designers, local government authorities and police need empirical evidence that cycle lanes are safe. The report from Stewart and McHale offers some thought-provoking analysis on the benefits of a cycle lane. The authors cite previous research that notes cycle lanes help create a greater physical division between cars and cyclists. 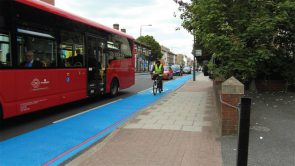 Painted cycle lanes: is that sufficient for safety?

However, a cycle lane might force a cyclist into a precarious position on the road, such as to the extreme left that limits his or her safest options for manoeuvring in traffic. This can be particularly hazardous at junctions where cars and trucks, especially heavy goods vehicles, are turning left, placing the cyclist outside the driver’s central area of vision, or even in the driver’s blind spot. That doesn’t mean that cycle lanes aren’t effective, the study notes, it just means that to make them most effective, many variables must be considered when incorporating them into road designs or putting them in after the road is built.

Stewart and McHale’s 11-page report, Cycle Lanes: their effect on driver passing distances in urban areas*, acknowledges previous research, but challenges assumptions about the effectiveness of cycle lanes. In particular, their research considers whether cars give a wider birth – the overtaking distance – when passing cyclists in defined cycle lanes. In their study, the authors used bicycles equipped with cameras to record thousands of vehicle overtakes in varying road situations around Edinburgh. In the first half of the study, three situations were analysed: no cycle lane versus uncoloured lane; uncoloured cycle lane versus coloured lane; and no cycle lane versus coloured lane.

For the comparison of uncoloured cycle lane versus coloured lane, the roads were 9.4m to 9.8m wide and cycle lanes were 1.4m to 1.6m wide. Analysis found only a slight difference in overtaking difference – 0.02m for vehicles passing cyclists in a coloured cycle lane, with or without the passing vehicle encountering oncoming traffic. This was not a “statistically significant difference”.

Finally, for no cycle lane versus coloured lane, both roads were 9.8m wide and the cycle lanes along the one road were 1.5m and 1.6m wide. The result was “no statistical difference (in overtaking distances) in any vehicle category in the urban 30mph environment”. The lack of a cycle lane meant drivers gave cyclists only 0.02m more room than when the cyclist was in a coloured cycle lane. The second half of the study concerned other factors apart from cycle lanes that might affect a driver’s decision on overtaking distances. Data was compiled for overtakes of 2.5m or less and then for overtakes of more than 2.5m. 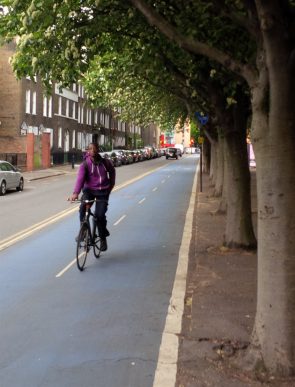 For both sets of data, it found that the three most significant variables were road width, the presence of parked cars on the road and the presence of oncoming vehicles. All affected overtaking distances. Generally, the wider the road, the wider the berth given to cyclists. Regarding parked cars, the report noted the result was “logical”; parked cars meant a reduced road width allowing less room for a driver to move aside to overtake a cyclist.

What about oncoming vehicles? The report said, again, ‘logically’ overtaking distance decreases… ‘because when the road becomes busier, visibility is reduced and hence time for the driver to consider deviating from the path is reduced’. Speeds of cyclist and driver also determined overtaking distances. The first set of data showed that ‘faster drivers generally provided more space when overtaking a cyclist’. In the second set of data, ‘the faster the cyclist was going, the overtaking distances increased’.

The report concludes that overall road width, parking and opposing traffic are more significant factors than the provision of a cycle lane. The authors noted that ‘there should be a presumption against the automatic provision of cycle lanes’ especially if they will be narrow in width. But foremost when considering a road designed for safer cycling, the report suggests that the ‘reducing or calming of existing motorised traffic must be explored first, creating an attractive and welcoming environment’. Like any good empirical research project, this one concludes by saying more work needs to be done, especially on one of the ‘more unexplored potentially significant variables’, that being the driver – or, more explicitly, the driver’s behaviour.

The report notes that other research has found big differences in what people say they will do when approaching a cyclist in a cycle lane and what they actually do. Culture, frustrations over traffic congestion, time behind the wheel and even the time of day could play a part in determining overtaking distances in urban areas. Cyclists, too, are subject to variables, not least their own perceptions of what constitutes a ‘safe’ overtaking distance. Cyclists and drivers have choices in all situations and lives may depend on the choices. Unfortunately, the choices made often come down to simply what side of the bed they got out of that morning.

One of the most important cycling infrastructure design concerns is the physical separation of cyclist and car.

Danish urban design expert Mikael Colville- Andersen is adamant that at a certain speed, bicycles and cars just don’t mix: “If you have car speeds of over 60 km/h, you must get bicycle users as far away from the car traffic as possible.”

“Cycle lanes as you know them in the UK and in other countries are merely some stripes of paint and do little to keep bicycle users safe,” says Colville-Andersen, chief executive of Copenhagenize, a Danish consultancy for bicycle culture, planning, traffic and communications.

Humans will react to design and bicycle infrastructure doesn’t work when it is badly designed. “The fault almost exclusively falls with traffic engineers. Despite the fact that we know all about best practice for bicycle infrastructure, there are too many examples of badly engineered and designed lanes and tracks.”

There aren’t many mathematical models that can replace hours of good old fashioned observation, he says. If cyclists are struggling with traffic and cycle lane layouts and are going off the set paths onto their own trajectory – so-called desire lines – then engineers should consider these natural routes when designing cycle routes.