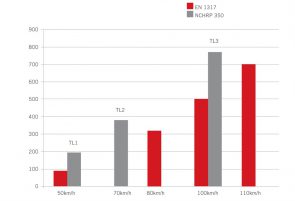 Most of the crash cushions available on the market are designed according to one of the major international standards, namely EN 1317 and NCHRP 350. EN 1317 is the European standard and it is still used to certify new products, whereas NCHRP 350 is the US standard and was used up to 2010 to certify road safety products but now it has been replaced by the MASH standard.

NCHRP 350 prescribes to test crash cushions with two different kinds of cars: an 820kg small car and a 2tonne pick-up truck. These vehicles are both used to certify the crash cushions for three different levels of velocity, namely 50km/h (TL1), 70km/h (TL2) and 100km/h (TL3).

In figure 1 the energy is shown for each capacity test for each level of velocity in the two standards. The gray bars are for NCHRP 350, whereas the red bars are for EN 1317.

Comparison of the energy in kJ involved in the capacity test at each level of velocity: gray – NCHRP 350; red – EN 1317.

From Figure 1 it appears that the energy involved in the impacts are comparable for TL2 (NCHRP350) and 80km/h (EN1317) but also for TL3 (NCHRP) and 110km/h (NCHRP). It is necessary to compare the requirements of the two standards.

A train with a mass of 90tonnes travelling at 4.7km/h will have the same kinetic energy characteristic as a 200kg motorcycle travelling at 315km/h.

But assuming that these vehicles were to impact with a TL3 barrier, the results would be very different. It is of note that the speed of deceleration is crucial to the injuries any passengers or drivers receive.

This example is useful to understand an important aspect related to the difference between the NCHRP 350 and EN 1317. It is true that the energetic level of NCHRP 350 is larger than that of EN 1317 by 70kJ. However, the EN 1317 test deals with an impact at 110km/h, a speed of 10km/h greater than for NCHRP 350, and the higher speed results in a greater deceleration.

From Figure 2 it appears that the NCHRP 350 standard requires running only two frontal crash tests, whereas EN 1317 requires running four frontal impacts. On the other hand, EN 1317 requires running only two side impacts, whereas the NCHRP 350 requires running four side impacts. The maximum kinetic energy involved in the frontal impact is 770kJ for NCHRP 350 and 700kJ for EN 1317. Referring to the side impacts the difference in terms of energy between the two standards increases: the kinetic energy calculated using only the transverse component of the velocity is 90kJ required by NCHRP 350, whereas that required by EN 1317 is only 47kJ. As a result, the side impacts for NCHRP 350 are for much greater forces than EN 1317. However it is worth noting that for the NCHRP 350 standard, it is not mandatory to run the head-on impact with a small car and the angle impact at 15° on the front. The latter is the most difficult crash test to pass from a perspective of biomechanical parameters due to the deceleration and occupant impact velocity.

Evaluation of crash test data is crucial. But before any kind of crash test, accelerometers must be installed that correspond to the centre of gravity of the vehicle. These accelerometers measure deceleration during the impact of the vehicle against the crash cushion. Both standards are designed to record the longitudinal (X), transversal (Y) and vertical (Z) acceleration. The way the data is recorded is the same in the two standards, but there are differences in the way this data is used to calculate the various biomechanical parameters.

In both standards, the occupant of the vehicle is considered as an object free to move inside the passenger compartment. The head will continue to move at the nominal velocity of impact due to inertial effect whereas the compartment of the vehicle around it will begin to decelerate due to the opposing force applied on the vehicle by the impacted safety device. Consequently it is possible to define a time at which the head hits the passenger compartment, this is called the flight time and is indicated by t*. Both the two standards are designed to calculate t* as the time at which the occupant (or the occupant’s head) inside the vehicle has travelled either 0.6m in the longitudinal direction or 0.3m in the lateral direction.

In this, the NCHRP 350 standard sets the same limit of 43.2km/h for OIV in both the frontal and side crash tests. However, EN 1317 sets two different limits for THIV in the frontal and side tests. The limit for the frontal test is 44km/h and in the side test the limit is 33km/h. As a result the THIV and the OIV limits are almost the same for the frontal impact. But for the side impact, the EN 1317 limit is more conservative and safer than that of NCHRP 350. In addition, NCHRP 350 only evaluates the longitudinal component of the velocity.

Once the limit for the occupant velocity is fixed, it becomes more difficult to stay within the limits should initial velocity increase. This means that from the THIV or OIV point of view it is more difficult to pass a test at 110km/h for EN1317 than at 100km/h for NCHRP350, even if the energy involved in the impact is almost the same.

ORA and ASI are both a measure of the average deceleration of the vehicle during the impact against the safety device. The starting data for the calculation of the two parameters are the data coming from the accelerometers.

The maximum admissible value of the ASI for crash cushions is equal to 1.4. This means that in the framework of the EN 1317 the maximum admissible average acceleration in the longitudinal direction is 16.8g and in the lateral direction is 12.6g. Both values are well below the limits of 20g fixed by the NCHRP 350. More importantly, the EN 1317 standard considers the accelerations in x and y directions combined together in the ASI formula, whereas NCHRP 350 considers accelerations in x and y directions separately.

In addition to the evaluation of the biomechanical parameters (ORA-ASI and OIV and THIV) the two standards reveal other evaluation criteria. Referring to these concerns, the requirements of the two standards are very similar. Both standards prescribe that detached elements from the test article should not penetrate the occupant compartment, present a hazard to traffic, or block the driver’s vision and that the vehicle should remain upright.

Overall it is clear that the NCHRP 350 standard is stricter than EN 1317 with respect to the capacity to absorb energy involved in the frontal impact and especially in the lateral impacts. On the other hand EN 1317 is stricter than NCHRP350 with respect to the evaluation criteria because the limits of the biomechanical parameters of the EN1317 are lower than those for the NCHRP 350. This is because the NCHRP 350 standard permits higher occupant impact velocities and greater average occupant decelerations. In all, NCHRP requires stronger and stiffer crash cushions, whereas EN1317 is more focused on the forces experienced by vehicle occupants.

It is however feasible to design a crash cushion that is compliant to both standards. This can be carried out by testing the safety device according to the EN1317 and then running two additional crash tests. The first is a capacity crash test in order to fill the gap between the energies of the frontal impact in the two standard. Running a TL3.31 test on an EN1317 product is sufficient to show that the system is able to fill the energy gap.