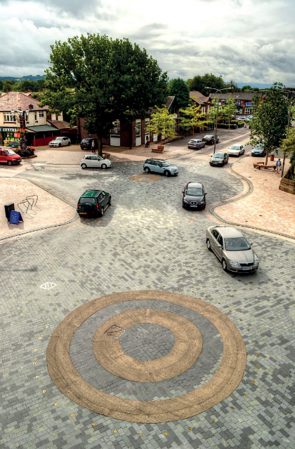 Lines delineate between different parts of the road – anything from the edges of the paved area to separating opposing traffic flows and cyclists, junctions, turn lanes, pedestrian crossings… the list goes on. But in many people’s minds this can also imply rights – i.e. ‘this is car territory’, ‘bicycles only’, ‘pedestrians have priority’ and so on. And when road users are in what they perceive to be their allotted space, they may have less consideration for other road users.

Dutch traffic engineer Hans Monderman turned this thinking on its head in the 1980s with his Shared Space concept where lane markers, signs, crosswalks, traffic lights and even kerbs were removed from certain roads.

The removal of lines and kerbs is designed to blur the demarcation of the motorists’, cyclists’ and pedestrians’ ‘territory’ – and with it any entitlement or prioritisation. All modes are equal so motorists, cyclists and pedestrians have to negotiate their way through the streets by interacting with each other rather than assuming any priority.

Shared spaces are community projects that impact the road network rather a road project that impacts the community and none more so than in the English town of Poynton.

The town has a population of 15,000 and its centre was dominated by the signalised intersection of the A523 between Macclesfield and Manchester and the A5149, which effectively divided the community into four areas by inhibiting residents’ movement.

In a bid to revitalise the community, the area of the intersection was turned into a shared space with the traffic lights and road marking replaced by two ‘roundalls’. The roadways approaching the shared space were reduced to one lane in each direction and that freed space was used to increase the width of the pavements and the resulting uncertainty the created in drivers’ minds causes them to slow down. 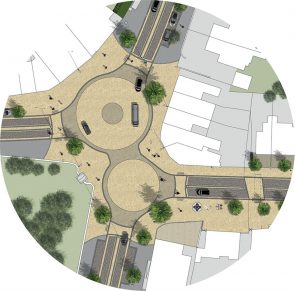 According to transport and urban design consultant Ben Hamilton-Baillie who created the layout, the design speed is 16-17mph and post-installation sampling data shows the average speed to be at or just above that figure. The traffic is more of a continuous flow now rather than the stop-start pattern created by the traffic lights and, according to Hamilton-Baillie, the excessive speeds that had been witnessed in off-peak periods have not reccurred.

Residents report finding it far easier to cross the roads as the vehicles stop for them and almost 90% of local businesses have seen an increase in footfall, so in terms of a community project it appears to be achieving its aim.

While the theory of all modes being equal is to be welcomed, because none of the road users have priority, some believe it encourages individuals to become more assertive and thereby press home an advantage over less confident road users. So, for instance, as a parent pushing a pram cannot go to a crossing where they do have priority, they either to wait for a possibly prolonged period for a gap in the traffic or to make their way across a road amid the moving vehicles, cyclists and pedestrians. 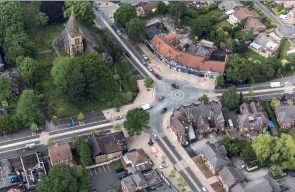 Roadways were reduced to one lane in each direction, with pavement widths increased

The removal of pedestrian crossings has troubled residents and local businesses in areas where such schemes have been proposed, and some charities too. Guide Dogs, a charity for partially sighted and blind people, surveyed guide dog owners in the UK and the Netherlands found ‘the overwhelming majority was opposed to the implementation of shared surface areas’. Visually impaired people reported concerns about the increased risks to their safety, reduced confidence and independence as well as a lack of involvement in the consultation process.

For partially sighted or blind people the removal of the distinction between ‘footway’ and ‘carriageway’ caused them to feel unsafe and uncertain. In Poynton, high-contrast and textured ‘edges’ to paved areas have been used to help combat these problems.

So what is the effect of mixing traffic, pedestrians and cyclists in this way?

Video footage reportedly showing a shared space in Graz depict a very confused situation with pedestrians, cyclists and vehicles all seemingly using the space as they wish. 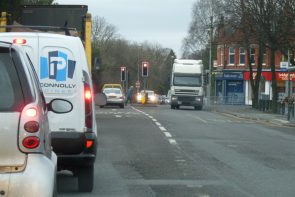 What is evident is that the traffic is moving so slowly it is unlikely that people would be badly injured if a collision did take place but in terms of transport it is not at all efficient.

In terms of safety, figures from the local police show that, in the two years before construction started and the two years after completion, collisions within 200m of the intersection more than halved (down to 25 from 52) although injuries notched up slightly from 11 to 12. If the radius is halved, then the number of crashes before the scheme started drops by nine – potentially the result of the higher speeds and the stop-start nature of the queueing traffic approaching the old design’s traffic lights.

The Sheriffhall Roundabout after the installation of illuminating

However, shared space is neither a solution for all communities nor a panacea where they have been installed. In Poynton’s shared space a pedestrian was seriously injured by a hit and run driver who went onto the pavement to pass queueing cars and then crossed raised strips to enter the shared space before hitting a teenager. The driver was been sentenced to two years and eight months in prison after the jury was shown a CCTV recording of the incident. While such incidents can happen anywhere drivers are prepared to flout the law, the physical constraints of the shared space do not prevent such occurrences.

There are other effects that may not be evident from the statistics. For instance, in Poynton there is a petition to have additional traffic calming measure in a residential street that runs between A523 and the A5149 and avoids the shared space intersection. Both ends of the road in question are inside the vehicle count boundaries and it already has speed humps to deter motorists from using it as a junction bypass and such diversions become increasing likely as the use of satellite navigation increases.

The Sheriffhall Roundabout on the A720 Edinburgh City bypass is signal controlled and has spiral markings – but it also has the highest injury rate for a roundabout on the Scottish trunk road network.

Theoretically, drivers approaching a spiral marked roundabout choose the correct lane for their destination and, as the lane spirals outwards, they will remain in that lane throughout the manoeuvre. While the spiral marking of roundabouts has been shown to reduce risk, crashes still occur – so the question is ‘why?’

With the traffic light minimising (or eliminating) the potential for rear-end shunts while entering the roundabout, a likely cause of accidents would be a vehicle moving from one lane to another. To find out, Richard Llewellyn of Edinburgh Napier University studied video footage of 55,000 vehicles negotiating the roundabout during peak and off-peak periods and in both daylight and darkness. This showed that in daylight hours around one driver in eight (12.75%) strayed from the spiral lane or changed lane altogether while in the hours of darkness this increased to almost one in five (18.92%).

There was a noticeable drop in the proportion of lane transgressions as traffic volumes increased.
In an effort to reduce the number of motorists straying from the marked lanes, the road authority installed Clearview’s illuminated studs to highlight the roundabout’s entry layout. To minimise the chance of confusing drivers, the stud’s illumination was coordinated with the traffic lights to show the correct path onto the roundabout. When the lights changed, so did the illumination pattern of the studs – this time to guide motorists around the roundabout to their desired exit.

As a result of installing the studs the proportion of motorists changing or straying from their chosen lane dropped to fewer than one in 12 (7.85%) which represented a reduction of almost 40%. During the hours of darkness there was a smaller reduction (around 30%) of vehicles wandering out of their lane, but the proportion making complete lane changes increased due to more truck drivers devising their own path round the roundabout.

Preliminary results for the first six months of operation showed that there were only two injury collisions while the average for the same period in the previous five years was 5.2 collisions. On this basis, a like-for-like downward trend in collisions would appear to be emerging in line with the reduced conflict potential revealed by the research work.