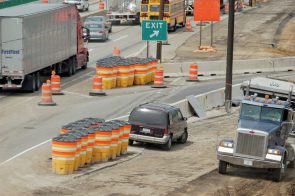 Developing nations needs safer road technologies. Mike Dreznes explains how sand barrels may be the answer for many countries

Approximately 30% of all fatalities on the world’s roads are single vehicle, non-pedestrian crashes where an errant vehicle leaves the road, goes down a slope, flips over or impacts a rigid object at the roadside. Ideally all rigid roadside objects should be removed to create a clear zone to allow errant vehicles first to recover and then safely return to the roadway.

However, when it is not possible to remove these, it is possible to reduce the consequences of the crashes by installing a crash cushion. Also known as impact attenuators, these can be placed in front of rigid objects to protect motorists. Using a crash cushion helps to create a “forgiving road” that forgives an Vehicle when someone behind the wheel makes a mistake that will inevitably be made by most, if not all drivers.

In the US in the 1970s, and in Europe until the early 1990s, the concept of a crash cushion was very new and few people understood what they were. That situation has changed and crash cushion systems have been installed across the road networks of the US and Europe, as well as in Canada, Japan or Australia, for example. Unfortunately, today in many low and middle income countries around the world, the concept is still new and not widely understood by drivers or road authorities alike.

Crash cushions are now standard safety products in the US, Australia, Canada and many of the European countries with excellent safety records. They are mandated and included in every road design, and they have been credited with saving tens of thousands – if not hundreds of thousands – of lives over the past 40 years. These are placed in front of rigid roadside objects and blunt ends located close to the road, so as to prevent vehicles from experiencing catastrophic impacts with potential loss of life to occupants. 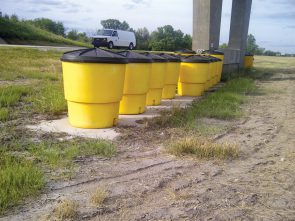 But why are these energy absorbing lifesavers not being used in every country in the world? The answer may be two-fold: road authorities in some countries may be unaware of these safety products or road authorities in some lower income countries cannot justify the initial cost as well as the cost to maintain these safety features. However, there are old and proven, yet simple and low cost solutions that should be taken under serious consideration by all road authorities in every country in the world. They can help to make roads more forgiving for the occupants of those vehicles that leave the roadway and strike a roadside object, with a corresponding reduction in road deaths as a result.

The definition of the word “attenuate” is, “to reduce the severity, virulence, or vitality,” so an impact attenuator reduces the severity of a crash. As well as crash cushions, other examples could be seat belts, airbags, or longitudinal barriers, transitions and guardrail terminals. These are passive safety devices because they do not prevent the impact but instead reduce the severity of the collision.

Some of the first crash cushions introduced in the US were empty steel drums that had the tops and the bottoms removed and placed in an array in front of the barrier end or roadside object. The idea was to soften the initial impact and these units were especially suitable for use with lighter weight vehicles. The drums in the back had small holes in their tops and empty beer cans were sometimes stuffed inside to give them additional stiffness. This allowed the drums to absorb the energy from larger vehicles before they impacted the rigid object behind.

In the 1970s, these steel drum arrays were replaced by arrays of sand barrels and the empty beer cans were replaced by sand. The number of barrels in an array, and the quantity of sand in each barrel, are determined based on the design speed and the width of the hazard. It is extremely important to use the appropriate number of barrels in a properly designed array. Single row arrays should never be used, and putting only one or two barrels in front of a rigid object is a waste of money that generates a false sense of security. These inertial sand barrel impact attenuators continue to be used today and while the concept may look simple, it is rather more complex than it seems.

Sand barrels used in inertial sand barrel impact attenuators are designed to be strong enough to be lifted with nearly 1000kg of sand inside of them. This performance often is required, and especially when these inertial sand barrel impact attenuators are used as temporary protection in a work zone. They are designed to break upon impact to allow the errant vehicle to “bulldoze” through the sand contained in the barrels, so as to absorb the vehicle’s energy.  This is known as the conservation of momentum principle or momentum transfer. 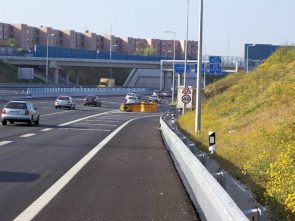 Since the 1970s, highways in the US have benefited from the use of sand barrel type attenuators

The sand barrels placed in the front of an inertial sand barrel impact attenuator array will feature about 90kg of sand inside so as to reduce the consequences of an impact by a lightweight vehicle. The next rows may have about 180kg of sand.  The next rows may have about 320kg of sand while the next to the last rows may have about 450kg of sand inside. Very often the last rows will contain about 960kg of sand to ensure the energy from larger weight vehicles (up to 2000kg) is absorbed and prevent an impact with the rigid object. If these differing quantities of sand were simply placed in the bottom of each barrel, the sand would act as a ramp when impacted by an errant vehicle. For this reason, inserts are placed in the barrels to lift the sand off the ground and thus maintain the same centre of gravity, regardless of the quantity of sand contained inside. Using an insert ensures that the vehicle will remain stable as it is brought to a controlled stop. It is also important that the sand does not freeze in cold weather. To tackle this issue, salt is sometimes mixed with the sand in areas where moisture can get into the barrels and freezing temperatures are common.

Inertial sand barrel impact attenuators can be very effective if they are impacted head-on, and properly designed arrays of inertial sand barrel impact attenuators have been tested at 100km/h (Test Level 3) to the US NCHRP 350 standard and at 110km/h in Europe to the EN1317-4 standard. Both the US and European crash testing methodologies are accepted in a wide range of developing nations, so these test results do provide guidance for road authorities. The inertial sand barrel impact attenuators are considered as non-re-directive crash cushions, since they are not able to redirect an errant vehicle that impacts the sand barrels on an angle on the side of the array. A vehicle impacting the very rear of the array on an angle collides with what is considered the “coffin corner” because the vehicle may be able to reach the rigid object. For this reason the barrels near the corner of the hazard need to be placed at a minimum 760mm offset, as recommended by the manufacturers.

They are considered “disposable” or “sacrificial” crash cushions because they must be replaced after a design impact – and they also do require maintenance to clean up the sand after an impact. 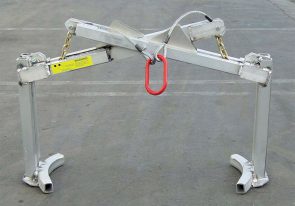 Special lifting devices can be used to set up attenuator arrays

The goal of road authorities must continue to be to reduce “needless deaths” to help them meet the United Nations Road Safety Collaboration Decade of Action challenge to reduce fatalities on their roads by 50% by 2020. Not making the effort to make their roads more “forgiving” when drivers make their inevitable mistakes through the use of inertial sand barrel impact attenuators to shield rigid objects on their roads is irresponsible and inexcusable. It is the road authority’s responsibility to be aware of state-of-the-art safety devices and to mandate their use. It is not a design consultants’ job to teach a road authority about road safety. If a road authority is already aware of crash cushions or impact attenuators and the excuse for not using them is due to their perceived high initial cost, inertial sand barrel impact attenuators provide the solution.

If something is important to someone, that person will “Find a Way” to make it happen. If it is not important, that person will find an excuse. But excuses are the tools of the incompetent and nothing in life is more important than saving someone’s life, especially when it is part of a job’s responsibility. Road authorities need to “Find a Way” to make their roads safer. The time for excuses for not making roads safer around the world is over.