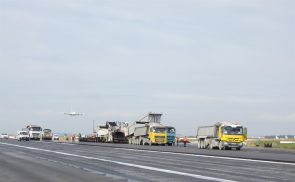 Operations were carried out within strict guidelines to meet airport requirements

During the summer 2014, runway number four at Paris-Charles de Gaulle airport was rehabilitated to improve bearing capacity and skid resistance

Runway number four – 2.7km long and 60m wide – was opened by Aéroports de Paris (ADP), owner of the airport, in 1998. It has been regularly maintained through long-term maintenance programmes since then.

Specification for reconstruction of the runway is to replace the concrete surface with asphalt. Reconstruction using asphalt aims to strengthen the runway structure, essential because of today’s larger and heavier passenger aircraft, and to improve skid resistance of the runway surface. At the same time, the geometry of the runway has been revised to ensure it conforms to new standards set by the International Civil Aviation Organisation.

Three months of monitoring by Eurovia were required for the project along with some computer modeling to show wear and stress points.

In total, 110,000tonnes of asphalt were laid in around six weeks using 30 asphalt rucks, four pavers equipped for both 5m-wide and 10m-wide laying, and nine capacity rollers. Airport regulations require that the jobsite compound and the two asphalt plants for the scheme were set up in areas with extremely strict access controls.

The new surface course on the runway – with a central width of 30m upon which to taxie and dispatch aircraft — will show no cold seal. To do this, all material deliveries, the laying and compaction of asphalt were mobilised, as well nearly 200 staff working in 12-hour shifts. 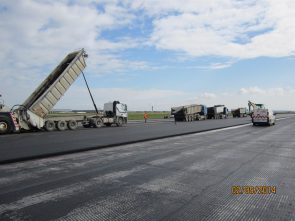 The challenge was to put down 12,600tonnes of asphalt (discontinuous aggregates) in a single pass. In addition, to comply with new rules of ICAO, the cross-section of the runway and shoulders were redesigned to 1.5% maximum falls and the security areas at both ends of the runway have been increased by 90m in length.

Reshaped and more secure, the new runway is built to a higher altimetry of 18cm additional thickness.

To retard crack propagation, a tack coat of bitumen emulsion with a neutral pH and a sand asphalt with high content modified bitumen (9%) was applied to the concrete slabs. This was supplemented with 192,000m² of Cidex 100 SB grid. The Cidex complied with the specification required by the airport engineers to prove it retards fatigue due to thermal shrinkage of the underlying layers and also due to the heavy load of the jumbo jet traffic.

Thus the results with the asphalts fatigue tests complying with the European standard EN 12697-24 was a requirement of approval of this material. To speed up the work it was decided to use multiple Cidex unwinding machines to cover the area in just six days.

With 30 years feedback of the installation, varying from countries with cooler climates in the northern hemisphere to warmer countries in tropics areas, Cidex composite made by 6D Solutions, has improved the behaviour of new airport runways and surfacing around habour sites.