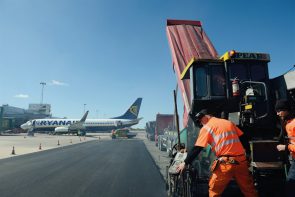 Surfacing work at an airport differs in many ways from the situation on a road. The weight and speed of aircraft place particularly strict demands on bearing capacity, friction, evenness and surface quality

The asphalt must also be highly resilient, and resistant to, strong chemicals because of exposure to aircraft fuel, de-icing agents and other chemicals. And because of the wide open spaces the asphalt becomes extremely hot in the summer, approaching 55°C, which can in turn give rise to deformations.

Gothenburg-Landvetter Airport is the second biggest in Sweden with in the region of 5.2 million passengers every year. A relatively high increase in the number of passengers is expected in the next few years. Landvetter is part of a network of 10 Swedish airports that are owned and operated by the state-owned company Swedavia. In 2014 a framework agreement covering several years was signed with Peab Asfalt for surfacing works at all of Swedavia’s airports.

According to the maintenance plan for Landvetter, upgrading was needed to the apron area in front of the gates where the aircraft park. Apart from one topping process at the end of the 1990s, no surfacing measures had been carried out on the area. It was, therefore, high time for comprehensive action, the first stage of which was completed in June 2015 and involved about 100,000m2 of area. 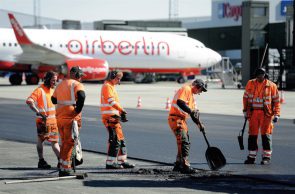 Because the surface’s useful technical life was nearing its end, it was decided to mill down deep into the base course. The surface was then built up again with three new layers of asphalt with a total thickness of 150mm. All milling was mechanically controlled in order to achieve the best result and to guarantee that courses of uniform thickness could be laid.

Included as an additional strengthening measure was carbon fibre reinforcement between the base and binder course of about parking areas a composite surface was also used, combining cement and asphalt in order to withstand extremely high concentrated loads.

In total, Peab laid 13,000tonnes of asphalt during the period, 10,000tonnes of which used Nynas Endura Z3 as a binder. The base bitumen included in Nynas Endura Z3 is harder than normal in order to enhance the stabilisation properties. Despite this, the asphalt mass can still be laid at normal temperatures, as the binder has been modified in several stages.

Date: May–June 2015By using a highly modified binder, the client wanted to increase the useful life of the surface and in doing so achieve significant financial benefits. To guarantee the best possible outcome, preparations included three test surfaces, which were analysed carefully with regard to everything from cavities to structure.

Although traffic will increase significantly at Landvetter in the next few years, it is expected that the surface will last about 20 years. Included in the maintenance plan is continual monitoring of the area because of the extreme conditions that the surface must endure. These include aircraft with full-fuel tanks making their way out to the runway and also the chances of spillage from glycol and other chemicals, not to mention wide variations in temperature.