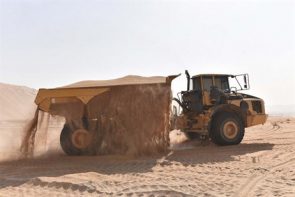 According to 6Wresearch, Saudi Arabia’s construction equipment market is forecast to grow at a CAGR of 8.75% during 2015-2021. The market is, as 6Wresearch states, highly import driven and a consolidated market with few global players accounting for majority of sales. International players are increasingly making their footprints in the market through partnerships or distribution

Metal and mining is said by 6Wresearch to be the major application of construction equipment market in the country. According to the Saudi Commission for Tourism and Antiquities, 214 new hotels would be built in the country over the next two years and over $30 billion would be invested to boost the hospitality sector.

Sathi Paul, research associate, research and consulting, 6Wresearch said: “The Western region of Saudi Arabia is the main revenue generator of the Saudi Arabia construction equipment market as large numbers of hotel and retail outlets are in the pipeline, which would be constructed in Madinah and Makkah.”

According to a new report by Timetric, 14 of the major economies in the Middle East and Africa are currently investing, or planning to invest, over $1 trillion in commercial and institutional projects. The UAE leads with investment of US$687 billion, followed by Saudi Arabia with US$436 billion and Kuwait with US$158 billion.

The mixed use sector is by far the highest value sector at US$1.47 trillion, says Timetric, followed by leisure and hospitality at US$134.6 billion. Institutional and religious projects, including government buildings and places of worship – which predominantly relates to mosques in the region, are valued at US$51.5 billion. Saudi Arabia dominates this sector with 84% of the value, driven by huge numbers of pilgrims to its major religious sites, which also provides investment in the leisure and hospitality market for hotels.

Expected expansion in the Qatari construction industry, and, as such, in the demand for construction equipment, during 2014-18 will be driven by the country’s National Vision 2030, its economic diversification policy, and the 2022 Fifa World Cup, resulting in increased government focus on infrastructure and commercial construction. Industry’s output is expected to record a CAGR of 13.28% in the years 2014–2018.

The US government’s lifting of sanctions on Iran, in January 2016 – after the United Nations’ nuclear watchdog found no credible evidence that Tehran had recently engaged in atomic weapons activity – will create huge opportunities for globally trading construction OEMs. According to MEED Insight, countries are already stepping up their drive to win business in the Middle East’s second-largest economy.

On a more negative note, transport and energy infrastructure consultant Aecom’s 2014 Middle East Construction Survey reports that the regional market has been reliant on an improvement in the UAE construction sector. However, with much of the work in the region coming from government sponsored infrastructure and energy schemes, political instability has led to a stagnation of work in many Middle East countries outside the UAE.

The scaling back of Qatar’s 2022 World Cup stadiums and Doha Metro has affected construction industry confidence, notes the Aecom Survey. Flow of new contract awards in Saudi Arabia has been slower than hoped over the past two years, according to Aecom, but several big housing and infrastructure programmes that have been delayed are expected to start in earnest over the coming months.

Transport is viewed by Aecom as the dominant sector in the Middle East construction industry due to airport projects, roads programmes and metros in a variety of major cities. MEED, says Aecom, has reported $278 billion of transport projects in planning. Crucially, Aecom’s survey confirms that Middle East construction is heavily dependent upon governments’ infrastructure plans for future growth – a similar situation to other major global regions such as sub-Saharan Africa.