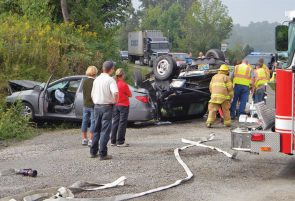 The aftermath of a collision at a rural intersection

Although ever-higher proportions of the global population are living in cities, rural roads remain the most dangerous in the world. This is illustrated by figures from America where rural routes carry only 35% of all traffic but account for some 54% road traffic accident deaths.

Of particular concern to the US authorities are rural two-way, static STOP sign-only equipped intersections as these account for 76% of these crashes. Statistics from the US Department of Transportation’s Federal Highway Administration (FHWA) show that while there are relatively few crashes at these intersections, those that do occur are more likely to be fatal.

At the same time, low traffic volumes on rural roads mean only limited funds are available for physical improvements such as realignments and grade smoothing.

A study by the National Highway Traffic Safety Administration (NHTSA) found that in crashes at rural intersections, 62% of the drivers involved had stopped to look before proceeding but did not see the vehicle that was approaching on the main route. A further 20% misjudged the gap that this vehicle was leaving; 14% had an obstructed view of the other vehicle; and 4% were the victims of ice-covered roads. In one sample, 90% even failed to see the STOP sign. 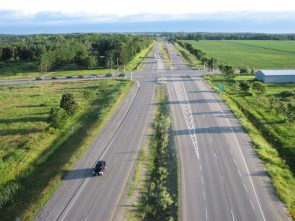 As far back as 1991 the FHWA’s intersection conflict warning system (ICWS) project introduced the concept of a dual assembly of traffic-actuated warning signs linked to pavement loops and a traffic signal controller. This led to the December 2011 issue of its Design and Evaluation Guidance, produced under the US Enterprise programme.

The underlying principle is that drivers approaching on a major through road receive a warning when a vehicle is preparing to enter an intersection from the cross street. At the same time, drivers waiting at STOP signs on the minor approach see a ‘crossing traffic’ sign when vehicles are approaching along the major route. Overall, results to date have shown reductions in fatal crashes and serious injuries by 30% and 80% respectively.

There remains concern about the use of continuously flashing signs designed to heighten driver awareness at STOP-controlled intersections. According to the North Carolina Department of Transportation, these fail to address the crucial issue of traffic gap-acceptance (as highlighted by the NHTSA) and can therefore deliver only modest safety improvements.

Its report stresses that motorists entering two-way, unsignalised intersections – having previously stopped at a static sign – have to make complex decisions on the speed and direction of approaching vehicles. In response, US states including Minnesota and North Carolina are actively engaged in developing ITS-based solutions that do not depend on the use of traffic signals.

In Minnesota nearly 70% of fatal vehicle collisions happen on country roads prompting its Department of Transportation (MnDOT) to initiate its Rural Intersection Conflict Warning System (RICWS) project. This uses a system that measures the time taken for a vehicle on the major route to travel between two sensors spaced some 6m (20ft) apart to determine its speed and calculate when the vehicle will arrive at the intersection.

It then alerts drivers on the minor route using a flashing bright yellow sign to give them around seven seconds’ notice to avoid entering the intersection.

The sensor loops are bored horizontally under the major route surface from the roadside, avoiding closures for installation and reducing future maintenance costs – a key issue for rural deployments. The University of Minnesota (UOM) evaluated the first installation which showed an activation rate of 99.98% (exceeding MnDOT’s 99.95% specification). There are now plans to deploy RICWS at up to 50 rural crossings. 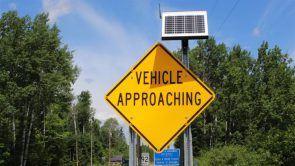 Results have shown an average decrease in vehicle speeds on the main approach of 6.2km/h (3.8mph) – which equates to almost one second of extra time. In a survey of residents living within close range of a test installation, 92% said the system improved safety.

In a parallel initiative, North Carolina Department of Transportation (NCDOT) has now deployed some 80 ‘vehicle entering when flashing’ conflict warning systems at STOPcontrolled intersections. These are typically sited where frontal impact crash patterns can be traced to poor gap acceptance and/or issues of sight distance (the length of a road a driver can see with adequate clearness).

An evaluation showed that two out of four versions trialled, one with advance post-mounted signs on the major road, another combining major- and minor-road alerts, have proved promising in reducing crashes at intersections where each road has two lanes, one in either direction.

NCDOT has identified the need for further research to improve the effectiveness of ‘vehicle entering when flashing’ intersections including traffic volume thresholds and analysis of intersection lane geometry.

Other issues requiring research include the sign sizes and messages, and the potential contribution of combined messaging on both major and minor approaches to intersections. On the technical side it will look at the distance between the loop detectors and the intersection, the number of loops on the minor approach (some have lead-in loops) and the variability of detector timing settings. While safety at unsignalised intersections remains a major national concern, fully-equipping a crossing can be hard to justify in rural areas, not least due to the costs of installation and maintenance. Apart from these, there is also evidence that traffic signals are not necessarily the best way of reducing crashes. 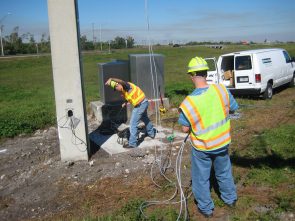 A November 2012 report for NCDOT cited two main reasons. The first of these was that when mainline traffic is forced to stop under high-speed, low-volume conditions, numbers of rear-end crashes may increase. Secondly, while signals can reduce delays on the lower-volume roads, they can increase delays on the mainline ones carrying greater traffic volumes.

To counter such eventualities Texas Transportation Institute (TTI) has developed the Detection-Control System (D-CS) for signalised rural high-speed intersections which it describes as ‘dilemma-zone protection technology’. Identifying vehicle lengths and speeds at locations 245m to 305m (800 feet to 1000 feet) upstream of an intersection, it monitors their approach lane-by-lane and assigns different weightings to trucks and cars based on length. By processing the resulting real-time traffic data, D-CS predicts the best time to end the green phase on the major approach.

It has emerged from two different needs: for a better system for managing high-speed (over 72km/h) signalised intersections; and for the ability to respond to mandatory speed reductions introduced in Houston (which has rural as well as urban areas). The problem with the conventional approach using fixed sensors is that these will be in the wrong place when speed limits change. D-CS is designed to be speed independent, while still protecting the dilemma zone – typically at isolated intersections.

The FHWA has so far deployed D-CS at sites in four US states, Texas, Florida, Louisiana and Illinois. Results have shown that frequencies of red light violations and numbers of vehicles trapped in dilemma zones have fallen by 68% and 57% respectively.

So while the problems at rural intersections has not been (and may never be) eliminated, strategies and technology are emerging to reduce the disproportionately high accident and fatality rates.