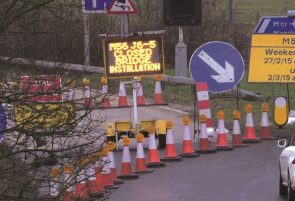 Safelane in operation on M56

Traffic management firm Chevron deployed the MVIS Safelane system to manage the full closure of the M56 between junctions five and six over a weekend, to allow a 1,500tonne bridge to be lifted into place to improve access to Manchester Airport. This required directing vehicles off the motorway and preventing other road users joining the motorway at four closure points using variable message signs (VMS) with live streaming CCTV mounted on the same platforms.

Intellicone sensors are placed on each of the cones used for temporary closures and if they are moved an alarm is sent to alert personnel in the work zone. In the Safelane application, a VMS message is wirelessly triggered to alert the errant driver before they reach the workers.

The VMS were surrounded by Intellicone intelligent cone barriers and contactless sensors to detect breaches. During the closure, VMS messages warned around 170,000 motorists they were approaching the work zone, of the road closure ahead and of the CCTV surveillance.

This solution meant that only two personnel, with manual alarms, were deployed per shift on perimeter guarding duties, compared with six for traditional methods.