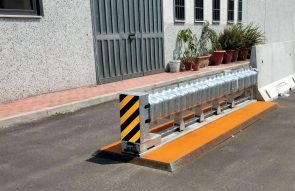 A variation of the company’s collapsible, energy-absorbing honeycomb is utilised in a new moveable barrier end for temporary concrete barriers which separate live lanes from work zones. The portable version is mounted on a heavy cast iron base, enabling it to be positioned without needing to be fixed to the ground.

A more permanent version can be used at the end of Jersey barriers and has been approved to the American standard for stopping a 2.2t pick-up.

A related innovation is a pole-mounted camera system called Geronimo that sits at the back of the crash cushion and records 10 seconds of video in an endless loop. If the crash cushion is impacted, the recording stops and the video clip is automatically sent back to the control centre along with an alert of the impact.

The company’s new City Crash Cushion is tested to 50km/h and sits on a 1m x 1m footprint. Where required, an aluminium cover containing attenuation can be specified to help protect motorcyclists unfortunate enough to impact the cushion.