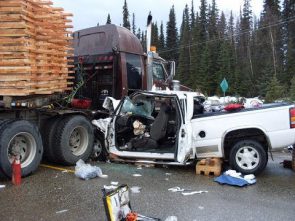 A truck in a crash

Making a clearer differentiation between the effects of trucks and cars, and of different truck types, in the European road traffic mix, is emerging as the key to gaining a much-needed better understanding of the roles of the heavier vehicles in causing traffic accidents.

In recent studies, researchers at the Spanish universities of Seville and Barcelona (Catalunya) have looked in detail at the coexistence of commercial and passenger vehicles on the continent’s highways, and at how this influences the numbers of deaths resulting from incidents.

Between 2004 and 2013 the European Union experienced growth in road freight transport of around 60%, adding 20.5bn tonne/km a year. EU statistics for 2014 show that heavy trucks accounted for 11% of the EU vehicle fleet but were responsible for 15% of deaths caused by road traffic accidents. Transport-vehicle related accidents overall are the second largest cause of fatal crashes, according to the European Agency for Safety and Health at Work.

Truck operations in Europe have become a major focus of academic research, not only because road transport is the backbone of freight logistics, but because the vehicles it uses are widely associated with negative environmental impacts such as air pollution and congestion. However, while these have been extensively analysed, the Spanish researchers have been able to find only a small number of studies that attempt to evaluate the complexities of trucks’ coexistence with cars – or support the implementation of differential road safety strategies.

Essentially, the academics argue, rising rates of motorisation for trucks in the traffic mix lead to higher levels of traffic deaths, while the rates for cars do not. (Most countries take account only of aggregate levels of motorisation).

Such rises can have two different effects on crash death rates: the first is greater exposure to accidents; the second is the development of better infrastructure and vehicles – and of more advanced policies for, and social attitudes towards, road safety. 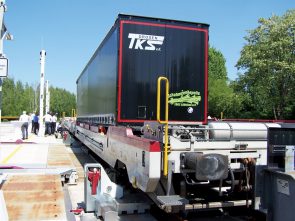 The Cargobeamer system, being trialled on a route from Leipzig in Germany to the port of Calais, in France, enables direct transfer of freight between road and rail, encouraging less use of road transport alone

The researchers conclude that, for passenger cars, the second is dominant; for trucks, the first is. These effects, they say “remain constant across Europe, even in the most highly developed countries boasting the best highway networks”.

A spokesperson for the International Road Assessment Programme (iRAP), which works to make roads safer in over 70 countries, told ITS International: “Traffic mix is not a major item in our model although we do note where truck speed limits differ from those of other vehicles. But it is an item on which we would hope to build in the future.”

The researchers go on to highlight the fact that “comparatively few studies” have evaluated the overall effectiveness of strategies for mitigating truck incidents, such as lane separation, and differential speed limits and enforcement regimes. Most previous research, they say, has focused on larger trucks.

One member of the Spanish team, Professor Mercedes Castro-Nuño of the University of Seville’s Applied Economics & Management Research Group, said: “We have applied econometric techniques to a wide range of data from EU Member States for the period 1999 to 2010. We have used statistics from official sources such as Eurostat [a directorate-general of the European Commission] and subjected these to a set of variables related to individual countries and truck-specific road safety policies. We show that the differential treatment of trucks is appropriate, not only for mitigating an important source of congestion and pollution, but also for the implementation of stricter road safety measures that will contribute significantly to reducing deaths”.

The researchers have also investigated the impact of two types of road safety regulation that have been introduced for trucks in Europe (although these have yet to be harmonised by all EU Members States): permitted speed limits and maximum blood alcohol concentration (BAC) rates. They find that lower speed limits are effective, but that maximum BAC levels for professional drivers are so only when strictly set at zero. 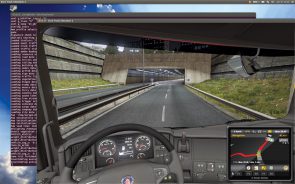 In a further study, which the researchers claim as being the ﬁrst in the EU to distinguish between heavy, medium-sized and lightweight trucks, they conclude that medium-sized vehicles perform worst in terms of traffic deaths, while lightweight ones perform worst in terms of trafﬁc accidents. Heavy trucks, however do not seem to be linked with greater numbers of trafﬁc accidents or deaths.

Relevant factors could include medium-sized trucks being operationally less ﬂexible than lightweight ones and capable of reaching higher speeds than heavy ones. Lightweight ones, in turn, may be used more often on urban trips and so be exposed to greater accident risks.

Again, heavy trucks are likely to be more resistant to accidents and are major adopters of modern safety equipment and technologies. They also usually circulate on wider, better and safer roads and are subject to stricter speed limits due to their weight and size.

Using them to replace larger numbers of lightweight or medium-sized trucks could reduce overall numbers of vehicle/km travelled and so improve road safety levels per unit of freight moved.

There could, however, be implications along the supply chain. For urban freight pick-up and delivery along the ‘last mile’, heavy trucks have to contend with greater restrictions as the result of  the congestion they cause, parking controls and higher concentrations of air pollution.

Again, both heavy and medium-sized trucks are seen as slow-moving vehicles contributing signiﬁcantly to urban problems. Combined with a recent liberalisation of the European road haulage market, this has resulted in greater numbers of light rather than heavier vehicles driving in urban trafﬁc.

The researchers accordingly flag up the need for detailed study of the optimal dimensions of freight transport vehicles that are compatible with sustainability and safety criteria. An increase in the mean size of European trucks, with the volume of goods transported remaining the same, would mean fewer trucks on the road and, in turn, reduced mortality levels. It could have an even greater impact in the light of 2011 findings by US researchers at Purdue University and Pennsylvania State University which have indicated that larger trucks can help to calm general traffic flows, by making other road-users drive more slowly.

In terms of vehicle characteristics, the fact that heavy trucks are potentially safer could pave the way for improving the engineering design of, introducing innovative safety systems appropriate to, and adopting customised regulatory frameworks for, different truck weights and configuration across the EU. (Parallel recommendations have been made in the US).

In a further conclusion, the researchers believe that their findings offer at least indirect support to policies being developed at Pan-European level to promote new multimodal transport corridors. These involve rail, inland waterways, short-sea (coastal) shipping and the new Motorways of the Seas concept, with its four planned corridors connecting via shore-based freight villages – the whole journey being coordinated by electronic logistics management and security systems. (Intra-EU shipping already accounts for the second-largest modal share of all freight transport – see table 1).

Shifting a greater proportion of freight from roads to rail, boat and/or ship for part of its journey would be a sustainable way of both meeting continuing rises in freight demand and reducing numbers of road accidents.

A 2015 study by the RACC, the largest automobile club in Spain, reports on the potential impact of the wholesale shifting of trucks that currently use some 1,800km of conventional roads in the country to motorways and higher-grade routes run parallel. This, it says, would save up to 79 deaths and 214 serious injuries a year on the older roads, representing an annual saving of as much as €157 million. (US$177 million).

It also flags up the greater seriousness of accidents on older roads – with 27% of victims dying as compared with 18% on modern ones, the former figure reflecting a greater proportion of head-on crashes. Tourists proved particularly vulnerable when being overtaken by trucks.