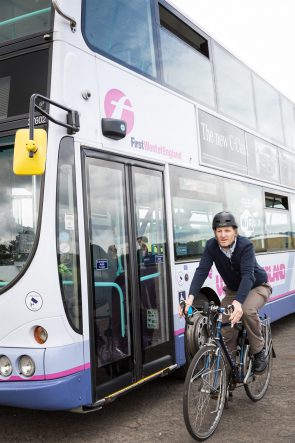 Bristol City Council in the UK has unlocked funding from the Local Sustainable Transport Fund to support the installation of CycleEye cyclist sensor alert systems on a number of buses operated by the European Green Capital’s main operator First West of England.

Designed by Bristol-based Fusion Processing, CycleEye has been developed to reduce the growing number of cyclist collisions and casualties. Fitted to the side of a bus, CycleEye operates night and day in all weathers, using radar and camera sensors to identify cyclists in potentially dangerous situations in close proximity to the bus and giving an audible alert to the driver’s cab.

The system is programmed to ignore other nearby objects such as bollards, railings or other vehicles so they are not mistaken for cycles, eliminating false alerts. The audible-only system also reduces cognitive overload on the driver, allowing them to respond faster to potentially critical situations.