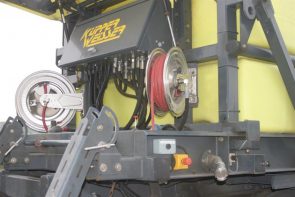 Part of the road surface consists of low-noise washed concrete, the other part of the surface being made of stone mastic asphalt. Due to the fact that residential areas are located nearby open porous asphalt was used on an 8km section of the road for its anti-noise properties.

Each of these road surfaces has its own characteristics with regard to the formation of ice at winter temperatures.

For the rest of the time, preventive salt spreading is either continuously spread on the route, at the junctions and intersections, or locally spread on specific areas during inspection drives.

Altogether those preventive salt spreading activities represent 30-40% of the rock salt consumption during an average winter season. Various options have been contemplated to optimise salt consumption. Options which may have jeopardised traffic safety, such as reducing the spreading cycle, have been automatically discarded.

A reduction of the salt spreading rate (grammes/m2) would have been counterproductive since it would have resulted in an increased number of snow clearing cycles. All winter maintenance trucks in Autobahnplus Services are equipped with a monitoring device providing precise information on the salt rates spread by the different truck drivers.

In the case of continuous spreading no significant difference between the various winter service vehicle drivers with regard to the consumption of rock salt could be noticed. In the case of local spreading of salt, however, differences could actually be noticed. Some drivers tend to locally spread high quantities of rock salt, whereas others rely on the usual predefined rates.

Autobahnplus Services decided, however, not to issue strict salt spreading instructions, since each driver is responsible for the rate of salt to be spread by adapting it to the momentary circumstances.

The Federal Institute for Road Construction (Bundesanstalt für Strassenbau) has conducted various tests since 2010 which have been conclusive: in contexts similar to the one of the A8, use of brine sprayers for preventive winter maintenance effectively enables salt consumption savings.

Different suppliers experienced in using brine sprayers on motorways and high-speed lanes have been identified. A+S examined different brine spraying equipment at IFAT, the international trade fair for water, sewage, refuse and recycling, held in Munich in spring 2012, and was able to highlight differences in the design of the individual technical components. These included the use of round nozzles or the combination of round nozzles and fan nozzles for spraying the brine solution.

A+S also referred to the various tests already undertaken by the Federal Institute for Road Construction (Bundesanstalt für Strassenbau) on brine sprayers with regard to effect duration, mode of action and spray pattern.

In addition, the spray pattern generated by the various manufacturers was examined in order to rank the different brine sprayers in terms of uniformity and evenness of the generated surfaces. Moreover, brine spraying covers two main different practices and equipment: full-wet systems and combined-wet systems.

Combined-wet systems are conventional spreading units fitted with a spraying unit in addition to the standard distribution system. In comparison to a wet-salt device the combined-wet system has increased quantities of salt brine on board.

Vehicles with a combined-wet system suit applications where the drivers have to cope with the demands of different road sections, such as frequent changes in road surface conditions, steep slopes and viaducts.

A+S selected the full-wet solution, employing two vehicles for preventive de-icing. The full-wet sprayer applying brine on the main motorway is paired by a wet-salt spreader spreading salt at the junctions and additionally on the top plates and the open porous asphalt areas, if need be.

Investments, which do not necessarily belong to the basic equipment required for an operating company, are, as a rule, examined with regard to long-term profitability and necessity.

In a motorway maintenance depot there are many special devices, which are actually required, but used only very little during the year. To ensure that the brine sprayer does not have to be put on the list of equipment with a low utilisation rate, A+S considered other possibilities for application. An analysis of all activities performed showed that the tank volume could be used in two different ways. For design reasons, an alley of trees had been planted in the central reservation outside the city gates of Munich. Over a distance of 2km, trees in raised beds were planted in the midst of the concrete wall barriers. The care of the trees is very time-consuming, since several times a year larger amounts of fresh water are required for watering the trees during dry seasons. Being exposed to direct spray-water, the raised beds are confronted with high salt loads during winter time. To deal with the issue, the roots of each tree need to be rinsed in spring using a drainage pipe system. Huge quantities of water are required for this, so the rinsing out process could be complemented using the full-wet sprayer with its high pressure water pump and 20m hose line.

The cleaning of around 80 bridges and a huge number of structural components, such as bearings, noise protection walls, supporting walls and drainage channels is also carried out by a motorway maintenance depot. The surfaces are highly stressed by dust, abrasion and emissions, some of which even deeply penetrate into the components thus causing damage. As a consequence, the idea of washing the components on a regular basis was born. In cooperation with the manufacturer of the brine sprayer, the vehicle was equipped with a high-pressure pump system with a water pressure of 160bar.

Since that time, the structural components in the spray zones, such as abutments, mid-section supports and the lower parts of the noise protection walls are cleaned by a high-pressure water blaster once the winter is over. However, it is important to prevent pollutants penetrating into the concrete structure even more quickly. To this end, it is recommended to observe a minimum distance of 300mm between the nozzle and the structural component.

When considering the purchase of a brine sprayer, another important factor to take into account is how much time is needed to fill the brine tank with a capacity of 8,000litres. A filling time of about 20-25 minutes is needed for filling the production-line tank of the wet-salt spreader with a 3,000litre volume.

So, a downtime of one hour would have been needed to fill the tank. As a result, the capacity of the pumps of the brine facility had to be increased as well to ensure that the filling of the brine sprayer could be completed within 20 minutes as well. In the course of the first years of operation, the brine facility proved to be susceptible to operational faults, particularly when temperatures fell below -10°C. These were solved by placing heating wires on the walls of the mixing block, where a fusion of water and salt is provided. As a consequence, nearly no more idle times occurred in the following winter period.

The total investment in equipment included the brine sprayer, the high-pressure water blaster and the increase of capacity of the brine production. Meanwhile the payback period turned out to be less than three years, thanks to the savings made in salt consumption, which dropped 30% from 1,000-700tonnes/ winter period, as well as through savings in personnel costs.