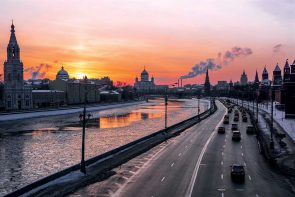 The Russian Federal Highway administration (RosAvtodor) recently adopted a programme to improve its road infrastructure sustainability, a tough task given the country’s extreme temperatures. There is also extreme mechanical stress on its roads, thanks to the prolific use of studded tyres used in winter to get a grip on icy highways.

To help with Russia’s sustainability programme, Total carried out a project in July 2012 south of Moscow on the M2 motorway towards Sebastopol to evaluate the use of polymer modified bitumen based on its Styrelf technology.

The level of performance of the binder and the asphalt mix were evaluated extensively during construction. It is also is continually evaluated to ensure pavement sustainability, a major goal as RosAvtodor adopted a programme to build nearly 20,000km of roads by 2030.

Currently, most roads in Russia are covered with conventional bitumens. These do not have the same lifespan as polymer modified bitumens – so called PmB – when used on roadways that are subject to some of the severest weather conditions in the country’s northernmost reaches. As a result, a significant percentage of the country’s finances go on road repairs and maintenance; road construction is often put on hold.

Russian President Vladimir Putin’s wish was to improve links between Russia’s two main cities of Moscow and St Petersburg. Total has been involved in the project through its flagship modified binder Styrelf.

In order to assess the benefits and the prospects that the Styrelf binder offers the Russian market, it was tested in July 2012 on an SMA20-covered section of the M2 motorway, the Simferopol Motorway, between Moscow and the Crimea. The worksite was between kilometres 83 and 84 on an SMA20 [1] (meaning Stone Mastic Asphalt) asphalt mix type over concrete substrate.

This motorway was selected because of the heavy traffic. The new Simferopol road is a favourite route for holidaymakers from Moscow and other major towns and cities in central Russia travelling to the southern resort coast of the Crimea. Up to 50,000 vehicles use the road every day. Also, heavy goods vehicles account for a significant proportion of this traffic. This means that Total Styrelf technology has been tested under extremely severe usage conditions on one of Russia’s busiest roads.

To ensure success, Total developed a special type of Styrelf binder that takes both traffic density and the region’s climate conditions into account. The region has a temperate continental climate: average January temperatures range from -7 to -14°C and can fall as low as -30°C. Meanwhile, average July temperatures range from 16°C to 22°C, but can climb as high as 40°C. The various constraints associated with rutting and the use of studded tyres in winter have also been factored in. The products are currently defined in Russia in accordance with the governmentdefined GOST standards which specify all the commercial and industrial standards across the Russian Federation. They are issued and maintained by the Federal Agency for Technical Regulation and Metrology. In accordance with the requirements of the GOST 52056-2003 standard [2], for example, a binder must have a minimum penetration grade at 0°C for 60 seconds with a 200g load in addition to the standard penetration grade at 25°C. Total, therefore, incorpor
ated this important factor into its Styrelf PmB binder so that it meets the requirements of both the GOST 52056-2003 standard and those of the European 14023-2010 standards [3]. This Styrelf PmB binder is considered as a PmB 60 according to the GOST 52056: 2003 standard and as a PmB 40/100-65 according to the En 14023: 2010 one (table 1).

Formulation and Properties of Styrelf

To develop the Styrelf binder used on the test section of the M2 motorway, Total used road bitumen penetration from 90 to 130 1/10mm from the Moscow refinery, MNPZGazprom Neft. The Styrelf 40-100/65 binder was manufactured by Total’s Ścinawa plant in Poland.

The PmB was then transported to the site. In order to assess the Styrelf binder’s capacity to remain of the same quality throughout its 10-day 1,500km transportation, samples were taken when leaving the plant and then once again as part of the acceptance procedure when arriving on site. The sample was evaluated according to the EN 14023: 2010 standard (table).

As the results show, the Styrelf technology PmB binder remains stable and the performance levels of new and aged binder are the same – even after 10 days of transport.

The goal is to achieve the building of the surface course on a concrete substrate. Weather conditions were partially cloudy without rain. Temperatures ranged from 14°C in early morning to 28°C during the afternoon. Two asphalt formulas were developed at the M2 motorway site. One is type SMA20, in compliance with the GOST 31015: 2002 standard [1], and the other is type SMA22, in compliance with the European EN 13108:5 standard [4]. Russian laboratories use a round meshed sieve whereas the European laboratories use a square meshed sieve such that the grading curves are slightly different. For these asphalt mixes, the materials used were Gabbro granulates and limestone filler type. By using both asphalt formulas on adjacent 500m sections, their levels of performance can be compared and data can be obtained for the project to align with European Union and Russian standards.

The main aim of the experiment is to assess how Styrelf technology performs on asphalt that is subject to rutting in which cracks appear on a concrete support and that is exposed to high levels of wear on a very busy road that is subject to significant weather stresses. The asphalts (on SMA 20 formula) were, therefore, classified in accordance with the results of three tests. These tests are usually carried out in Europe (TSRST, WTT and CLT) and which could become a reference for Russia.

The asphalt with Styrelf binder has a cracking temperature of less than -30°C. This makes it highly resistant to low temperatures – a crucial characteristic given Russia’s climate. Furthermore, results of the Hamburg Wheel Tracking and Cantabro Loss Tests show that it is highly resistant to traffic: low resistance to extraction of under 5% in weight and to rutting with rutting depths of less than 3mm. Overall evaluations carried out either on the binder or on the asphalt mix have shown that the specific Styrelf binder reaches an excellent level of performance, with monitoring taking place annually.

The high level of performance of Styrelf binder comes from a tried and tested technology that has been approved in numerous countries. In particular, it meets the demanding durability requirements of the Russian government. Given this, Total and GazProm Neft created a joint venture together in 2013 in order to build a polymer modified plant, a facility which has been open since the middle of 2014.