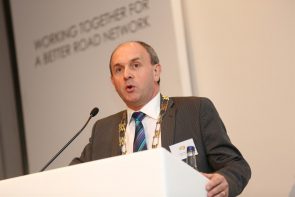 Some sector organisations are not that active for its members, but the UK’s Road Surface Treatments Association is making itself known, now that England’s road authority is thinking strategically.

It’s a window of opportunity that hasn’t existed for a decade or more. All the UK is pulling out of the worst of the mostly global economic crisis. The tight reins of austerity are loosening up and England has a new roads authority that wants to think long-term road strategies.

For many local authorities in England, but also Scotland, Wales and Northern Ireland, the buzzword now is “asset management”. Mike Harper, global business director of UK highway maintenance materials specialist Stirling Lloyd, welcomes the change and sees opportunities, not just for his company but the sector as a whole. In May, Harper, who has 26 years in the industry, was appointed chairman of the UK Road Surface Treatments Association, the RSTA.

During the austere years, local authorities were handed a budget that shrank annually and told to stay within it. Now they have to think longer term “This has made local authorities think about how to look after the road for the next 20 years, not just for next year. It’s about treating your asset well, to intervene now, to stop future decay processes,” he says.

“In one sense, the past five years have actually been quite good for the surface treatments industry. Local authorities used to revert to the default position of resurfacing, but the money has not been there for that.” This has focussed minds on value for money and authorities are less likely to rip up roads that have been sometimes up to 90% in good shape, except for cracks and some joints in need of repair.

“It’s made all engineers think more cleverly about what exactly is wrong with a particular stretch of road. Going back a few years, there were fewer dedicated crack and joint repair products, unlike now.”

On the UK’s first smart motorway project, on part of the M42 motorway, they had to install new gantries and so widened the road slightly which meant the lanes were shifted to one side. This meant the white dividing lines had to be shifted off the asphalt seams between the lanes. They blasted the white lines off the seams which tended to remove the bituminous matrix from the asphalt and within a couple of weeks the seams were opening up. That was in 2010, but good crack repair work was done and only now are they resurfacing the road.

“Surface treatment, from an environmental perspective, is also a really good story. If they had taken off four lanes of asphalt for 19km of the M42, that would have been thousands of tonnes, but we kept that going for another five years.”

The Road Surface Dressing Association, one of the RSTA’s main member associations, now does around 20 million m2 in the UK, and it’s low cost: under €3 versus planning off and reinstating a road which might cost around €20 per m2.

But the sector has seen implications from the slump in oil prices. “It has affected the treatment sector but surprisingly not in a good way,” he says. Many contracts are based on an HTMA (Highways Term Maintenance Association) contract and their formula for price fluctuations is linked to heavy fuel oil.

1989: University of Hertfordshire, BSc in geology and astrophysics

1989: Joined Tarmac Roadstone on a graduate management training scheme; had jobs in quarry materials production, including managing an apshalt plant, and in sales and business development

1994: Moved to RMD Kwikform, in technical sales of equipment for bridge construction

2000: Stirling Lloyd; initially in sales for two years and then as business development director for global operationsBut a lot of the costings are based on bitumen and the prices of the two aren’t necessarily linked. While the price of crude has gone down enormously, the price of bitumen has actually gone up.

“That in turn has led to an expectation by clients that the price of treatments should go down.” Some clients suspect that they are getting “ripped off”, he said. Harper would like the RSTA to get involved with the stakeholders, including the HTMA, and change the price mechanism, and so change that expectation. With no indication that the price of oil will drop drastically the next year or so, this dialogue will become increasingly important, he said.

Before taking over as chairman, Harper had chaired the high-friction surfacing – or anti-skid – committee for two years and started the crack and joint sub-committee for asphalt. He was recently in the US giving presentations about skid resistance, which is directly linked to saving lives. The systems on offer by UK companies are very well developed, he said, because there has been since the late 1960s a strong emphasis by road designers to create infrastructure, including road surfaces, that save lives: “Our fatal road accidents have been generally declining ever since.”

Skid resistance is an area that is only now being seriously looked at in the US, he said. “The chances of being killed on the road in the United States is about five times higher than in the UK, per capita. High-friction surfacing could be the next big thing in the US.”

In fact, there is a federal initiative that has ring-fenced around US$2.4 billion to bring road casualties down, he said. “It could also be spent on better lighting, better signage, that sort of thing.”

However, in the UK, there are indications that maintenance managers are seeing high-friction surfaces as something they can cut out to save money, he said. But to counterbalance this attitude there has been the creation earlier this year of Highways England from the old Highways Agency.

Highways England, which takes care of roads only in England, is a stand-alone non-government company with the remit to improve the roads and – importantly – has a guaranteed budget over several years, not just from one year to the next. This makes strategic construction and asset management much easier, knowing the money is there. There is no guessing what money will be available from year to year, explains Harper.

“The way that they are thinking now is much better for UK plc [private UK road contractors],” he said. “They are now talking about 10-year intervention-free pavement.” But Harper is concerned that Highways England has said it wants to resurface 80% of English roads in the next five years. “For the asphalt guys like our members, that is good. But for the paying public, is that really necessary? Would it not be more sensible to take it on a case-by-case basis?”

If there is little wrong with the surface, just treat the seams and put on a surface treatment to keep the road going, rather than full-scale plane-out and resurface. “And with the money saved, look at barrier work and other passive life-saving systems. There are still 1,700 accidents a year in the UK.”

Years ago, the UK used to overband everything – “literally filling a watering can and tipping it out over a crack” – to stop water getting in. “It got a bit abused as a technique,” he said. There were one or two high-profile accidents where motorcyclists skidded off on overbanded area that were not as wide as they should have been around the seam.

“So they stopped overbanding and now we have all of these joints opening up. So the industry has worked really hard to bring new overbanding materials in which can seal cracks but not spread and not lose their skid resistance.”

While new chemicals and materials are being developed, he said the issue is really about treating the pavement long before the cracks appear. This is where the RSTA members have a lot of solutions to offer, especially about intervention at a suitable point in time. Oxidation is another issue gaining in importance. So to maintain the surface it should be treated as early as possible while the pavement is in new to good shape.

In Germany, they tend to put down a lot of MMA [Methyl Methacrylate resin] cold plastic lines, “which last about seven times longer than the lines we put down in the UK. It’s a much harder wearing material. Our thermoplastics are much softer and we often replace lines every year. We can learn from Germany.”

On the subject of concrete, does it remain a poor cousin to asphalt? “It does and it doesn’t,” he says. “If you look at the US, it’s everywhere. And some of the original concrete motorways in the UK still exist. There’s issues around these joints, too, and also of the slabs rocking.”

Concrete has its place as a long-term material, he said. Reconstruction of the A30 and A35 [in south-west England] were done as a 25-year design-build-finance-operate job and the consortia used concrete roads because of their long life expectancy. The plan was to put asphalt on top of the concrete after 15 years to make the road last to 25 years.

“However, in the UK it’s really about noise and concrete is not so readily accepted,” he says.

Will we see more concrete roads in the UK? “I don’t think so.”

Harper at the RSTA

Road Surface Treatment Association members include national and local contracting companies, local authority direct-labour organisations, as well as material and equipment suppliers. Harper chaired the RSTA High-Friction Surfacing Committee in 2013 and 2014, standing down to take up the chairmanship of the RSTA overall in 2015.

He still chairs the RSTA sub-committee on crack and joint repair in asphalt pavements. He also represents the RSTA on Specialist Group 1 (SG1) chaired by the BBA – British Board of Agrément – that oversees policy on high-friction surfacing in the UK. Harper also frequently speaks at conferences on highways maintenance and tunnel waterproofing throughout the world.