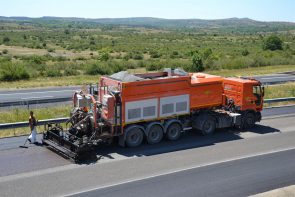 Breining has introduced what it says is a new concept in slurry micro-surfacing, Novasurfacing, to extend the life of the surface and make it easier to apply

Breining has developed a slurry paver, called Novasealer, which unites a binder spreading machine and slurry micro-surfacing. Besides the fact that the life span of the road surface is extended, the bitumen glue layer is used to prevent peeling, especially on scraped roads.

The introduction of glass fibre has several functions. First it reduces road noise and significantly increase adherence and durability. Finally, the fibre assures cohesion of the mix and also avoids segregation, which makes it possible to apply it easily and without drips.

Because micro-surfacing requires regulation of the different components of a formula, Breining has also developed its Novasystem, a computer on board the spreader machine that ensures traceability of the constituent formula parts. The basic system includes temperature air and a GPS positioning unit.