Assessing the performance of natural bitumen from Albania 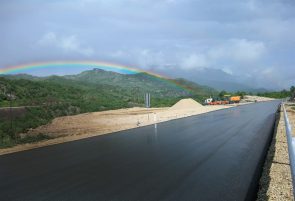 The market for high modulus asphalt mixes has become very competitive in recent years, most notably in the segment for bitumen additives. Written by Edith Tartari, MSc Eng, electronics engineer with Selenice Bitumi in Albania

The exploitation of natural asphalts as additives to modify the asphalt binders represents a growing challenge, especially in this moment when there is increasing demand for a more rational use of fossil fuels compatible with protection of the environment, ecosystems and the quality of human life.

Natural asphalts may represent a useful and economic alternative to the polymeric materials and other traditionally used modifiers of distillation bitumen, increasing the binder consistence, viscosity and stability. Their use allows superior performing asphalt pavements with higher values of stiffness and greater resistance to rutting and fatigue.

The Character of Natural Bitumen

Research work was conducted by the University of Rome ‘’La Sapienza” on the characterisation of natural asphalts and their evaluation as modifiers, using rheological and thermal techniques. For the study, three of the most commonly used types of natural asphalt were selected: Gilsonite from Utah deposit (United States), Selenizza (Albania) and Trinidad Lake Asphalt (Central America).

To investigate the nature of the modification, 10% (in weight) of each natural asphalts was added to a standard penetration grade bitumen 80–100 and mixed at a minimum temperature of 150–180°C in order to guarantee the complete solubility.

Rheological analysis was carried out with a rotating rheometer under isochronal conditions, with temperature scanning. This was to assess viscoelastic behaviour in relatively high temperatures, as well as under isothermal conditions, with frequency scanning, for determining the characteristics in a low-temperature range. Trails were performed in the respective linear viscoelastic areas for each sample in order to apply the temperature-frequency equivalency principle and generate the master curves.

As expected, for the three cases, the resulting modified bitumen was characterised by higher softening point (R&B temperatures) and lower penetration values, compared to the original standard bitumen, due to the presence of high percentages of asphaltenes content in the natural asphalts.

Principal characteristics of the original bitumen and the modified products

The table shows the principal characteristics of the original standard bitumen and the bitumen samples, modified with 10% of each type of natural asphalt. Furthermore, a proportional relationship was observed between the percentages of asphaltenes present in the modified samples of bitumen and the respective values of the softening point. 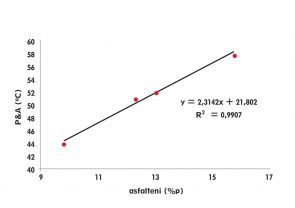 This correlation implies that the rheological behaviour for medium and high temperatures (50–160°C), whose softening point represents the lower limit, is not a function of the modifier quality and depends exclusively on the asphaltenes content.

Viscosity values of the modified bitumen for this temperature range increase. But even if the viscosity curves shift upwards, their shape and the slope remain unchanged and they remain parallel to one another, for all sample types. This means that the modifiers don’t affect the internal interactions between the asphaltene components in the modified bitumen, which is a typical phenomenon for the compatible additives. Thus, despite the significant increase of asphaltenes content (from 25% to 60%), the thermal susceptibility remains unaltered.

For the low temperatures (10–60°C), the rheological modifications seem complex and are differentiated. The viscoelastic behaviour and the ductility of the modified samples, deduced from the master curves at 20°C and 60°C, are impacted by the quality of the natural bitumen (the bituminous component and the inorganic one, which, in this case, may perform the function of filler, decisive for the product performance). At T=20°, an inversion of the zero shear viscosity curves was observed.

During the modulated differential scanning calorimetry (MDSC) tests, the samples (7–10 mg), were subjected to a modulated heat flow, resulting from a sinusoidal temperature ripple overlaid on a linear temperature ramp, in the temperature range from -50°C to +160°C.

The MDSC analysis, carried out with a calorimeter TA Instruments 2920, has shown that the rheological behaviour of the straight run bitumen has been modified by the addition of natural bitumen.

When comparing the softening temperatures obtained from different reversible curves of the original bitumen and the modified samples, it was observed that the addition of the natural asphalts Trinidad and Selenizza, affects the lower limit of the softening range of the straight-run bitumen. 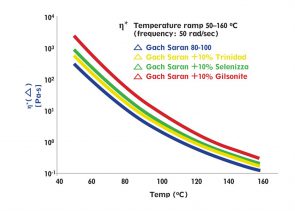 In conclusion, the study indicated that the modifications introduced by the addition of natural asphalts, operate in such a way as to increase the consistency, the viscosity and the stability of the original bitumen thus proving that the natural bitumen can represent an advantageous alternative to other additives for modifying the road pavement bitumen.

Use In Road Projects

Many examples of the implementation of road construction projects confirm the above-mentioned theoretical results.

During the construction of a 17.5km section of the A150 highway in France, the proposed project envisaged the implementation of a two-layer pavement structure consisting of a 6cm HMAC wearing course and a 12cm HMA binder course, over a PF3 sub-grade. With reference to the binder course, in order to meet the technical specifications according to the CE standard NF EN 13108-1, the project intended to use a recycled HMA base course EB 14 ASSISE 20/30 (EME 0/14 class 2). For the manufacture of the recycled hot-mix asphalt, two types of binders were analysed.

The basic HMA mix design contains 30% AE (asphalt aggregates) + 20/30 penetration grade bitumen. On the other hand, the alternative solution is composed of 30% AE (asphalt aggregates) + 50/70 grade bitumen + 1.5 % Selenizza. For comparison purposes, the two types of HMA had the same composition of materials in terms of particle size distribution curves and percentage of binder used.

The comparative study of the two different mix design types showed that both of them met the requested technical specifications and were in accordance with the standards. It should nevertheless be noted that on equal parameters of the obtained modified binder (penetration grade, softening point), the second approach, using natural bitumen, yields noticeably better results in terms of rheological and mechanical properties. There were higher results of stiffness (15 855MPa), better resistance to fatigue (137.1μm/m) and better resistance to rutting (3.3%).

These results validate the idea that the specific constituents of natural asphalts, shall be taken into consideration in the technicaleconomic choices. 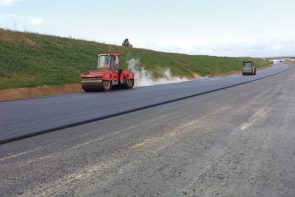 Highway A150 in France. An implementation of a two-layer pavement structure consisting of a 6cm HMAC wearing course and a 12cm HMA binder course, over a PF3 sub-grade

A further example comes from the construction of the Fier–Tepelene highway in Albania, where the natural bitumen Selenizza was used as an additive for the production of bituminous mixtures of the flexible pavement.

It was used because of problems in finding the right bitumen locally that could meet the requirements of the technical specifications. But it was used also because natural bitumen could simultaneously contribute to reduce by 4cm the total thickness of asphalt layers, compared to the thickness provided for in the original project design.

The new road pavement structure consisted of three layers of continuously graded bituminous mixtures, the base course (9cm), the binder course (6cm) and the wearing course (4cm). For all bituminous mixtures, the natural bitumen Selenizza was used to a percentage of 8% by weight of the base bitumen. A study conducted by the Polytechnic University of Turin in Italy, on materials sampled from the production plant, as well as on a test session, evaluated the binder and pavement performance.

The analysis of compact issues, by referring to binder viscosity and the binder-related contribution to the occurrence of rutting, fatigue and thermal cracking as well as the assessment of mixture stiffness, led to the conclusion that the considered bituminous mixtures containing the natural asphalt Selenizza, were in compliance with the pavement construction standards and specifications.

One last example on the successful use of the natural bitumen Selenizza, is the Highway A8 Olimpia Odos construction project in Greece. It involved 375km of highway and was designed according to the prescription of French standards. The road structure consisted of a Dense Bitumen Macadam (DBM) base course, an anti-rutting binder course AC (5cm) and an anti-skid TAC (thin asphalt concrete) wearing course (2.5cm).

Several trial mix designs for the base and binder courses were tested using different kinds of binders such as bitumen 50/70, bitumen 50/70 + 8% Selenizza, bitumen 30/50 and PR PLAST modified bitumen. Laboratory tests on elastic modulus and fatigue showed that the binder with bitumen 50/70 + 8% Selenizza, had higher results of stiffness and fatigue compared to all the other tested binders, allowing it to produce an asphalt concrete that belongs to the higher project category DBM 4. This made it possible to reduce the road package thickness by at least 4cm.

The recent worldwide economic crisis and the growing environmental awareness have created the need for bituminous binders that meet Life Cycle Assessment constraints. As a part of a common commitment to sustainable development, the University of Rome, in cooperation with the company Selenice Bitumi, carried out e research project, whose aim was to analyse and compare for the first time the production process of the Albanian natural asphalt (Selenizza). The project was also a chance to look at the steps necessary to produce conventional bitumen from crude oil, evaluating the energy consumption and CO2 emission for each kind of product. The study was based on the guidelines of the environmental assessments according to the European standard, such as Life Cycle Assessment (LCA) and Life Cycle Inventory (LCI), on the bitumen produced in crude oil refineries. 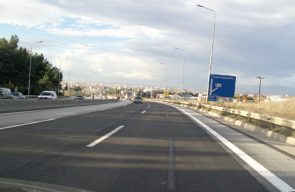 For conventional bitumen the energy consumption of each step has been calculated as well as the carbon dioxide emission, starting from oil extraction, up to vacuum distillation. It included the entire chain of bitumen production, beginning with the acquisition of raw materials, transport, manufacture, use and maintenance, recycling and final disposal.

The product cycle of natural asphalt Selenizza composed from four main phases – extraction, concentration, processing and storage. This is much simpler than the refinery cycle, with an immediate feedback in energy consumption and environmental impact. Moreover, transport stages are reduced to the minimum due to the close proximity of the quarry site to the processing unit.

For study purposes, all technical documentation about electrical equipment and vehicles operating at the mine of Selenice in Albania, together with geological and chemical analysis, were exploited to evaluate the energy consumption characterising each stage of the process.

Also, the value of the Italian-Albanian energy mix, determining the amount of CO2 emissions per kWh of electricity produced, was acquired from the International Energy Agency (IEA). The data on the calorific value of the fuels used during the production, that is, the amount of CO2 emissions per kg of burned fuel, were available from international literature and from ENI (Italian national hydrocarbons agency).

In the light of such an innovative analysis, it was concluded that the natural asphalt Selenizza allows substantial energy saving: 2,376MJ/t versus 4,71MJ/t, that is, about 50% of the value of the bitumen produced from crude oil. There was a significant reduction in CO2 emissions up to 44%: 127,3kg versus 226,2kg per tonne of conventional bitumen production.

A more efficient and smart use of natural resources at the dawn of the 21st century represents a challenge that we must all embrace. Indeed, the natural bitumen Selenizza, is an environmentally friendly product, available within the reach of every road construction company. It can also contribute to improving the quality of high modulus hot-mix asphalts. It offers a better resistance for the high-traffic stress roads, providing material savings by reducing layer thickness and ensuring increased pavement longevity.

Selenice Bitumi is a wholly owned subsidiary of French Company KLP Mines. The company owns the mine of Selenice, an open-pit natural bitumen reserve that constitutes the only deposit of natural bitumen in Europe.

The natural bitumen originating from these deposits is used as an additive and is mixed with refined bitumen, in different percentages, composing on average about 1% of the total mass of the binder.

Selenice Bitumi products are sold in France, Switzerland, Italy, Greece and Ukraine as well as in China, Canada and countries in North Africa, such as Tunisia and Morocco.