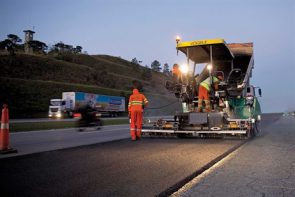 Brazil’s key SP-070 highway, also known as the Ayrton Senna Highway, between São Paulo and Campos do Jordão, Vale do Paraíba and Rio de Janeiro, is being rebuilt

Brazil, the biggest country in South America, is predicted by Timetric’s Construction Intelligence Center (CIC) to see limited growth prospects over the next five years, owing to its deteriorating economy, weak property market, and lack of investor confidence.

The Brazilian construction industry’s output value contracted from US$226.3bn in 2013 to US$214.9bn in 2014, reports Timetric CIC. This decline was mainly due to a large budget deficit and the implications of ‘Operation Lava Jato’, implemented to control the country’s corruption scandal.

The 2016 Olympic Games in Rio de Janeiro represents something of a silver lining, however, as construction activity is likely to increase. As a result, the industry’s output value is forecast by Timetric CIC to record slight growth in real terms, increasing to US$215.1bn in 2015. Over the next five years, however, growth prospects are tipped by the respected industry analyst firm to remain limited.

Despite the nation’s sluggish construction industry, LiuGong Machinery, a major Chinese maker of heavy construction equipment, has revealed plans to invest around US$38 million in Brazil-based manufacturing.

The announcement was made during the opening ceremony of the company’s first factory in Brazil, in the city of Mogi Guaçu, around 180km from São Paulo.

LiuGong expects to produce 1,500 wheeled loaders and excavators annually at the facility in the first three years of operation.

Operating in Brazil since 2007, LiuGong’s Mogi Guaçu plant is the company’s fourth outside China. Like Brazil, construction activity in Argentina was weak in 2014, due to the deteriorating business environment, currency depreciation and high inflation. Timetric CIC notes that the country’s construction industry contracted by 0.5% in real terms that year. This was preceded by an annual growth rate of 3.6% in real terms in 2013.

The industry’s value is expected by Timetric CIC to pick up over the 2015– 2019 period, with investment in public infrastructure, renewable and nuclear energy, commercial and industrial projects, and improvements in consumer and investor confidence.

With the country’s new centre-right president Mauricio Macri of the Cambiemos (Let’s Change) party sweeping to power in November 2015 after 12 years of leftist government, Timetric CIC believes there is likely to be an improvement in investors’ perceptions regarding the Argentine government, which could stimulate fresh investment.

While the Colombian construction industry’s growth is expected by Timetric CIC to slow down from a compound annual growth rate (CAGR) of 9.93% seen in the years 2010–2014, to 7.10% from 2015-19, it’s still a healthy growth rate, creating a good sales environment for construction equipment manufacturers. Expansion in the construction industry will be driven by the government’s investments in infrastructure and housing projects.

Meanwhile, Mexico’s construction industry is expected to continue to expand from 2015–2019, due to, Timetric CIC notes, government investment in energy, residential and infrastructure construction.

The government’s main areas of focus are said by the industry research firm to be addressing the country’s housing shortage, developing sources of renewable energy and improving transport and tourism infrastructure.

In the period 2015-19, growth will be driven by an increase in public and private sector investments, disposable income, population growth and urbanisation.

In addition to the host country, significant numbers of professional attendees came from throughout the region. The top five Latin American countries besides the host country (in order) were Argentina, Brazil, Peru, Colombia, and Bolivia.

CONEXPO Latin America is continuing its commitment to the Latin America region, returning in October 2016 with a high-level seminar programme in Lima, Peru.