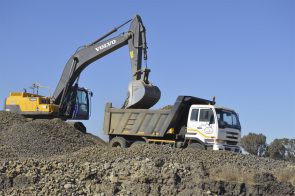 The African construction equipment market may offer huge potential growth, but that seems a long way off at present. An example of this can be found in new ISC figures showing a 25% drop in Africa earthmoving equipment sales in H1 2015, compared to the same period of 2014

Something needs to be done to address Africa’s perennial growth restrictors: corruption, weak currencies, red tape and lack of quality road and other logistics infrastructure.

In a recent interview with Aggregates Business International, Blandford said African quarrying and heavy construction customers are, like their counterparts in Europe and the Middle East, now beginning a steady process of fleet renewal with a big focus on total cost of ownership (TCO).

“Africa is an industry of around 23,000-25,000 units, and although the continent is absolutely huge, we have to [primarily] focus, to be successful, on sub-Saharan Africa. The biggest market within that is South Africa at about 6,000 units. We have an office in South Africa with a number of people there, as we believe we need people locally in the market in order to be successful.

“The second focus for us is in Africa is the Maghreb region: Algeria, Tunisia, and Morocco, in that order, as the second biggest Africa market is Algeria. The market there is today giving us and our competitors some difficulty. Due to the availability of currency, there are some import restrictions in place. The restrictions, though, will come off.

“The African market on a 12-months’ rolling basis is down about 7-8%. It doesn’t look that great today, but you have to say that if you look at Case globally, one of the largest growth opportunities we have is Africa. The question is when that growth will happen. The answer is different for all countries within Africa. It depends on things such as infrastructure investment and availability of capital.”

As Munesu Shoko reported in a recent edition of ABI, West Africa is the second biggest region as far as investment into infrastructure development is concerned – creating huge sales opportunities for construction-based OEMs. Total value of projects under construction increased from US$50 billion in 2013 to US$75 billion in 2014. Although the region only accounts for just half of Southern Africa’s spend, it is starting to close its infrastructure gap, anchored by Nigeria with its new title as the biggest economy in Africa.

East Africa has about $67 billion worth of construction projects under way. It is historically among Africa’s least developed regions, but with ongoing infrastructure development, coupled with several member countries boasting higher GDPs, the region has transformed into a strategic hub for aggregate producers, and, as such, an attractive growth region in which to sell construction equipment. With countries such as Ethiopia (9.5% in 2015) and Rwanda (7% in 2015) relishing higher GDPs, Kenya’s infrastructure development projects firing from all cylinders and Tanzania’s oil and gas finds turning the heads of investors, East Africa is well and truly on the up.