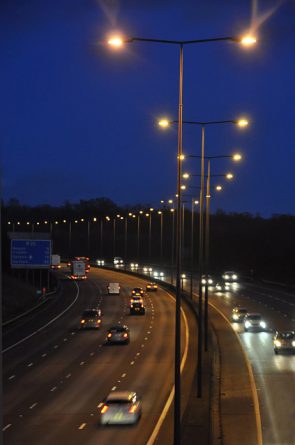 Street lighting can account for 40% of an authority’s energy consumption. So, faced with the need to reduce outgoings, some authorities are looking for smart management of street lighting or even turning off swathes of lights in the small hours.

Recent research by the UK’s Automobile Association (AA) showed that night-time accidents in bad weather on 48km/h (30mph) urban roads had fallen by 15.6% over the past five years. But where street lights had been switched off or are not present, the fall was just 2%.

The general consensus is that street lighting can reduce night-time accidents by 30% on residential roads. For motorways with no pedestrians and cyclists, figures from the UK Highways Agency indicate a 12% reduction. In many regions the regulations do not specifically require the local authority to light roads but they usually must consider the safety of all users.

To simply turn off the lights without due consideration and risk analysis could leave the local authority open to lawsuits in the case of an accident. So smarter lighting systems are becoming essential.

One of the easiest energy reduction measures is low-energy luminaires such as fluorescent tubes or light-emitting diodes (LEDs).

Between 2000 and 2014, the efficiency of LEDs increased by a factor of 10, costs have fallen and they have a longer service life. Consumption can now be lower than for fluorescent tubes, although the housing may be more expensive. Some companies now market direct LED-based replacements for high-intensity discharge lamps.

According to Allan Howard of consultants WSP, LEDs can save between 30% and 50% if the existing luminaire is high-pressure sodium or even metal-halide. However, he said savings are negligible in comparison with low pressure sodium, which is often the dominant source. That’s not to say there are no energy savings to be made with LED street lighting by trimming – adjusting the timing.

“Traditional light sources such as sodium can take 10 to 15 minutes to warm up before they give full illumination whereas LEDs produce their maximum light output from the moment they are turned on,” says Howard, who is also executive secretary of the UK branch of the International Committee on Illumination. “So you can reprogramme sensors to turn on LED lamps as the ambient light drops towards the specified level rather than 15 minutes earlier – which at dusk in the winter, when factories are still working, is the most expensive time to consume electricity.”

In many parts of the world, traffic volume dictates the required lighting level along a roadway. But, as pointed out by the AA, if only a quarter of car journeys are made between 7pm and 8am, then the average volume is not indicative of night-time traffic.

“When authorities look at the actual traffic flows between peak flow hours at night, they often find the illumination required is one or even two levels below what they are currently providing. So if regulations permit, the lighting levels can be reduced,” says Howard.

Buenos Aires: energy consumption was halved by introduction of LEDs

Although the reduction in energy usage will be proportionately less than the reduction in illumination, as many street lights are in operation for more than 4,000 hours per year, any reduction can pay dividends.

Such considerations were taken into account in 2007 when the UK’s lighting requirements were revised and the Highways Agency reviewed provisions for motorways.

This identified several stretches of motorway which no longer met the criteria that required lighting throughout the hours of darkness. So, in April and May 2009, following safety assessments, lights along six sections of motorway, totalling 28.5km /17.7 miles, were turned off between midnight and 5am.

In 2010/11 the lighting on a further eight sections of motorway, 77km /44 miles, was turned off between midnight and 6am. Lights can be turned on in the event of an incident.

The Highways Agency reported no evidence that switching off the lights had an adverse impact on safety. In the five years before the switch-off there was an average of five accidents per year, whereas in the two years following the switch-off the average was 4.9. However, the fatality rate rose slightly from an average of 0.4 per year to 0.8 after the switch-offs. The agency said such a small increase could reflect random variations. Available data suggests that turning the lights off has not had an impact on the volume and speed of early morning traffic.

Big savings can be made by turning on lighting only at a designated traffic volume, as the Highways Agency discovered. Between March 2011 and October 2012 it switched off lighting along eight stretches of motorway totalling 95km (59 miles).

Traffic on other roads also falls dramatically at night. In particular locations, such as Dark Sky areas, turning lights off may be desirable but not acceptable as it could increase risk around a road hazard.

In this instance, a motion sensor could activate lighting. This is another advantage that LEDs and fluorescent tubes have over high and low pressure sodium. Radar-based system supplier AGD Systems provided one such system at a roundabout close to the World Heritage site at Stonehenge in England.

On small roads, cycleways and footpaths, local authorities may be tempted to turn off the lights late at night when the number of users falls, but that can heighten public concern about road safety and crime. As Howard points out, perception is often the biggest obstacle for many users. “Potential users are reluctant to use an unlit cycleway or footpath even if they know the lights will come on once they have started.”

Far better, he said, to dim the lights and use motion detectors to increase intensity as required. “Energy savings will be less but there is no point in creating segregated paths if people are put off using them at night because they feel the lighting is inadequate.”

AGD said this dimming effect can be achieved by instrumenting every sixth to tenth lighting column. It would save at least some money but, importantly, reassure the public over safety concerns. While it is possible to differentiate between vehicles and pedestrians/cyclists and adjust the lighting levels accordingly, AGD said the additional costs may not be justified in all circumstances.

Conservation issues sometimes must be considered when setting up lighting systems, as happened for a footpath next to the River Thames in the town of Richmond, upstream from London. Conservationists found footpath lighting interfered with the resting and feeding areas for a species of rare bats. Initial plans to remove all the lights were rejected by local residents.

Richmond Council then worked with Philips Lighting to devise an LED luminaire that directs the illumination onto the path and halved the light spill. A motion sensing system allows LEDs to be dimmed to 20% when the path is not being used and brought back to full illumination as a person approaches. Sensors communicate with adjacent lamps so illuminations levels are increased ahead of a person walking the path and dimmed some way behind them. Energy consumption was reduced by 80%.

Also, unlike the previous luminaire, the LEDs do not produce ultraviolet radiation that attract the insects away from the river where the bats feed. As a result the bat population has increased while an evening riverside walk has remained as popular as ever.

Even small-scale changes to street lighting can produce substantial cost savings. By switching off the lights along less than 3% of the UK’s lit motorways, annual savings were more than £400k in 2012/13. This translated into a CO2 saving of 3,106tonnes.

Across in Argentina, the authority in Buenos Aires halved the energy consumed by street lighting after it commissioned Philips to replace 70% of the street lighting – 91,000 lights – with LEDs. The company also installed its CityTouch telemanagement platform allowing the authority to dim or switch off individual luminaires and monitor their operation for maintenance and replacement programming purposes.

As the service life of LEDs is around five times longer than for conventional lighting the maintenance requirements on converted street lighting is correspondingly lower.

Some believe that management centres set up to detect, report and rectify street lighting faults may no longer be required. However, with the increasing use of adaptive lighting, management centres could monitor energy use because many street light systems are not directly metered. Low-energy lighting is equally applicable for illuminating signs or bollards and while the potential savings are relatively low, the increase in reliability and extended service intervals remains attractive.

As both financial and carbon emissions savings can be made by converting to smart, low-energy street lighting, many sources are now available to authorities needing to fund the switchover, including favourable terms from those lending to environmentally-beneficial projects.

The Attraction of Solar Power

Solar-powered street lighting is an attractive proposition – no cabling, electricity bills or carbon emissions – but technical and practical considerations limit where they can provide the required levels of illumination throughout the hours of darkness.

In many instances the solar array and energy storage needed to meet the required illumination level may be too large and expensive to be viable.

But the inclusion of a system to dim or switch off the light when there is little traffic and no pedestrians or cyclists around, may conserve enough energy to provide the appropriate level of lighting when required. This additional technology will increase the unit cost and could potentially negate one of the key benefits – that of not requiring cabling, but it could also provide a solution in remote areas.